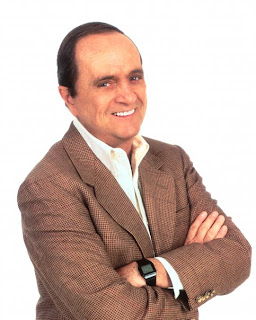 He has a Peabody, a Golden Globe, a Grammy, a Critics Choice Award and a star on the Hollywood Walk of Fame. And he's been nominated for an Emmy Award seven times. He's had four TV shows with his name in the title -- 1961's "The Bob Newhart Show," a variety hour and the one that won the Peabody and the Golden Globe; the MTM sitcom broadcast from 1972 to 1978 also called "The Bob Newhart Show," where he played a Chicago psychologist named Bob Hartley who had goofy patients and a lovely wife played by Suzanne Pleshette; "Newhart," another half-hour comedy, where he played a guy named Dick Loudon, who ran an inn in Vermont, from 1982 to 1990; and plain old "Bob," a show about a cartoonist that lasted one season and change in 1992 and 1993. Newhart famously joked that after those four, the only thing left to call a show of his was "The."

Three times, Bob Newhart was nominated by Emmy voters for his leading role on "Newhart," and then for a guest appearance on "ER" and as a supporting actor in the miniseries "The Librarian: The Curse of the Judas Chalice." Way back in 1962, he was nominated for writing that original "Bob Newhart Show." But he came away empty every time.

Now, at the age of 84, Bob Newhart has finally won his Emmy. This time it was for a guest appearance on "The Big Bang Theory," where he played Professor Proton, the host of a children's science show many years ago. After finding out that Professor Proton, their childhood hero, is available for personal appearances, "Big Bang" characters Sheldon and Leonard hire him just to hang out with them. Newhart's Emmy was handed out at the Primetime Creative Arts Emmy ceremony last night, which honors guest actors along with variety specials and interactive programs, animation and reality shows, documentaries and informational programs, voiceovers, art direction, costuming, casting, makeup, editing and cinematography.

The other guest actors honored were Carrie Preston ("The Good Wife") and Dan Bucatinsky ("Scandal") in the drama categories, and Melissa Leo ("Louie") as the other comedy winner.

You can check out all the winners (and pictures and news and interviews and other fun stuff) at the Emmy site here. And tune in on Sunday, September 22 to see the rest of the Primetime categories awarded. Neil Patrick Harris will be your host once again.
Posted by JulieK at 3:07 PM

Email ThisBlogThis!Share to TwitterShare to FacebookShare to Pinterest
Labels: Behind the Candelabra, Bob Newhart, Emmy Awards, The Big Bang Theory