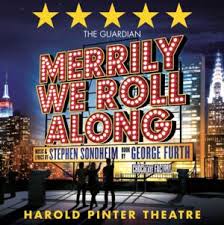 I love Merrily We Roll Along, the backwards musical (and famous flop) from Stephen Sondheim and George Furth that played for only 60 performances (including 44 previews) when it hit Broadway in 1981. Furth wrote the book of Merrily, which is based on a play by Kaufman and Hart that is similarly backwards, while Sondheim's score includes amazing pieces like "Not a Day Goes By," "Our Time," "Opening Doors" and "Good Thing Going."

People have speculated that it's the backwards thing that gave Merrily We Roll Along problems, but I think it had more to do with the span of time it covers. Since we see Franklin Shepard, his songwriting partner Charley Kringas, and their writer friend Mary Flynn, from their 40s back to their college years, the question has always been whether to cast young actors who can play older at the beginning, or older actors who can play younger by the end. That initial Broadway production went young, with people like Jason Alexander, Liz Callaway and Tonya Pinkins very early in their careers. Pinkins, for example, was only 19 at the time.

Subsequent productions have gone for a middle ground, with an off-Broadway version in 1994 that starred Malcom Gets, then in his 30s and a revival as part of New York City Center's Encores! show with 30-year-old Colin Donnell and 32-year-old Lin Manuel Miranda.

But the 2012 version, directed by Maria Friedman, herself a three-time Olivier Award winner, for London's Menier Chocolate Factory moved it up a notch, featuring Mark Umbers (39) and Jenna Russell (45) as Frank and Mary. And it apparently worked, since that production earned high marks from critics and from Mr. Sondheim himself. The New York Times quotes Sondheim as saying, "This production of ‘Merrily We Roll Along’ is not only the best I’ve seen, but one of those rare instances where casting, direction and show come together in perfect combination, resulting in the classic ideal of the sum being greater than the parts." Heady praise coming from Steve himself!

That quote accompanied an article at the NYT about the fact that the Menier/Friedman Merrily was filmed for broadcast purposes. The British Merrily We Roll Along will be shown in movie theaters all over England and the United States and Canada, with most shows scheduled for October 23rd. Individual theaters may choose to switch up the dates, though, so you'll need to check with yours to make sure.

The bad news is that nobody in Bloomington-Normal is on the list so far. But the good news is that Peoria and Champaign-Urbana (or Savoy, where the theater is) have stepped up, and Merrily We Roll Along will definitely roll along within driving distance. Fingers crossed that a Bloomington or Normal movie theater gets smart and puts Merrily on the bill here, too.

Tickets are slated to be on sale as of September 13, according to Fathom Events' site. I don't know about you, but I will be watching out and making my plans. I don't miss a Merrily We Roll Along, especially one as highly touted as this one.
Posted by JulieK at 2:06 PM