New Shows: Michael J.Fox vs. Robin Williams in the Battle of the 80s Sitcom Stars 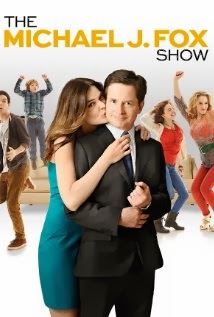 Michael J. Fox is one of those performers who rose above whatever vehicle he was in. I don't think either Family Ties or Spin City would've gone anywhere if they had cast, say, Matthew Broderick in the former or Charlie Sheen in the latter from the get-go. Whatever the show, Fox's intelligence and charm and especially his comic timing made it seem better than it was. But then Parkinson's Disease intruded. He still had America's heart, even if he wasn't doing television or movies anymore. That means great things were expected when he announced he was coming back to NBC with a sitcom built around him, acknowledging his Parkinson's and using it as part of the main character in The Michael J. Fox Show.

Contrast that with Robin Williams, who made his mark on TV as Mork of Mork and Mindy fame, and then went on to big, important movie roles where he was in turn lovable, crazy or really crazy. See: The Dead Poets Society, Mrs. Doubtfire, Good Will Hunting and The Birdcage for warm-and-fuzzy Williams, and The Fisher King, One Hour Photo and Insomnia for the nuts and psychopaths. I'm not sure where to put Popeye, except to note that he was terrific in it, and I totally believed him as a serious actor after that one. 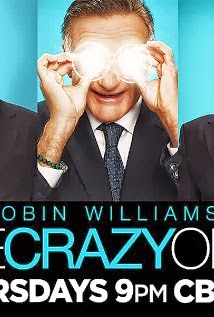 But Williams, too, had off-screen problems, mostly centered around substance abuse and just how out-of-control his comedy stylings could get when he was on a roll. The word "manic" comes to mind. Yes, Williams has always been funny, but sometimes it's not that great to be identified with "crazy" as a matter of course. His new show on CBS isn't backing away from that, however, going with The Crazy Ones as a title.

Both shows are on Thursday night, and last week, they both held the 8 pm (Central) slot. The Michael J. Fox Show came in with a slightly better critical reception than The Crazy Ones, but The Crazy Ones had a better lead-in with The Big Bang Theory and its boffo ratings than MJF got with back-to-back episodes of Parks and Recreation, a much superior show that has much inferior ratings.

In The Michael J. Fox Show, our hero is a much-beloved news anchor who left his desk due to Parkinson's but has now decided to come back. In The Crazy Ones, our hero is the wackadoodle head of an ad agency who works with his daughter (Sarah Michelle Gellar) and a very attractive subordinate (Mad Men's James Wolk). Neither premise is exactly inspired, but neither is terrible, either.

In The MJF Show, Michael J. Fox is as capable as ever, and Betsy Brandt is strong as his wife. I could take or leave the children, Katie Finneran is annoying as Fox's character's narcissistic sister, and the other supporting characters seem to come from The Comedy Stock Character Handbook instead of a place of creativity or inspiration. Mostly, I don't think I respond all that well to family-based sitcoms anymore, and that's exactly where this show finds its center. Teens, toddlers, underachievers at school, playtime at the park, hijinks ensuing...

Over at Crazy, we're playing with the grown-ups and their job-based hijinks instead. As I watched, I decided that Williams was fine, Gellar seemed uncomfortable, and Wolk was adorable. Plus Kelly Clarkson guested in the pilot as herself, or a version of herself who didn't want to sing the McDonald's jingle unless they sexed it up, and she was a lot of fun. Williams' brand of insanity actually worked when played off Clarkson and Wolk. And I wouldn't underestimate the power of Wolk being adorable. So far, anyway, I'd tune in just to see him sing jingles and fool around with clients.

Next week, these two shows will not be in direct competition, as Sean Hayes' Sean Saves the World moves into the 8 o'clock slot and The Michael J. Fox Show airs at 8:30 on NBC, while The Crazy Ones stays at 8, followed by that old chestnut, Two and a Half Men.

We'll see how the ratings shake out for The Crazy Ones without that Big Bang lead-in, and for The Michael J. Fox Show when it's drafting Sean Hayes' fumes. But for now, anyway, 80s star Robin Williams is leading 80s star Michael J. Fox in the battle for my TV time.