I remember Nick Offerman from his days as a theater student at the University of Illinois in Urbana, and I remember very distinctly that he didn't get cast a lot at the Krannert Center for the Performing Arts. I remember him playing a policeman blowing a whistle in a Feydeau farce in the Colwell Playhouse, and doing multiple scenes with fellow actors as part of a senior showcase. The group also sang Stephen Sondheim's "Opening Doors." And that's about all I recall, except for some work he did at Urbana's Station Theatre, outside the program. Oh, wait. There was also a new play staged at the Armory Free Theatre, written by Christopher Johnson, that involved Offerman stripping, wearing skimpy women's undies, and shoving his arm down a garbage disposal. At the time, I was all, ooh, gross, but in retrospect, I'm pretty impressed they could pull off the disposal/blood spatter effects in the Armory Theatre. 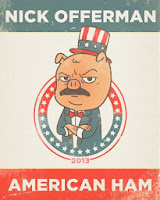 Now that Offerman is headed back to U of I for some special events planned to support Japan House, a project started by famed theater artist Shozo Sato on the Urbana campus, I've learned that he almost gave up his acting dream while he was a student, and it was Sato's Kabuki theater class that kept Offerman in the biz. At least that's what U of I's press release is telling us, as they announce that tickets are on sale now for a special Krannert Center stop on Offerman's "American Ham Tour," an evening of comedy and cautionary tales scheduled for the Foellinger Great Hall at 7:30 pm on October 26.

Apparently, Offerman was a frequent dinner guest at the Sato residence when he was an undergrad, and the two stayed in touch over the years, with the master of Zen arts also officiating when Offerman married actress Megan Mullally in 2003.

This visit to Champaign-Urbana will include not just the comedy show at Krannert on Saturday night, but also an "East Meets Midwest" eleven-course dinner on Sunday, October 27, with Shozo Sato and his wife, Alice, as a benefit for Japan House. Space is obviously very limited for the fundraising dinner, which will take place at Prairie Fruits Farms, and tickets are priced at $325 per person. If you'd like to see if tickets are still available for that event, you can visit the Japan House website or call them directly at 217-244-9934.

Chefs Shin Matsuda, Thad Morrow and Drew Starkey will be preparing this eleven-course meal, while a Japanese drumming group from Chicago called Ho Etsu Taiko will perform during dinner.

For all the details, check out the U of I press release here and Japan House's posted notice here.
Posted by JulieK at 2:43 PM