Whether it feels like summer has left or not, school is back in session, theaters are gearing up for fall, and your entertainment options are going to look a little more serious from now through the end of the year. Hang on tight. September is here!

Right this very minute, Heartland Theatre is accepting entries in its annual 10-minute play competition. FOWL PLAYS (or plays with some connection to the bird world) will be accepted through February 1, 2014. You can see all the details here and get to writing about the goose that laid the golden egg, blackbirds singing in the dead of night, a partridge in a pear tree, or why the caged bird never sings. 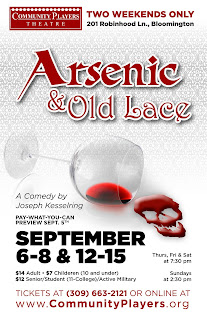 Community Players opens its first show of autumn with Arsenic and Old Lace, the Joseph Kesselring classic that made a lot of people look at elderly ladies and their tea parties a little differently. It's an up-tempo comedy set around murder, as sweet old Aunt Abby and Aunt Martha, played for Community Players by Carol Scott and Tricia Stiller, entice lonely gents into their parlor to knock them off with poisoned elderberry wine. It's the kindest thing to do, the aunts assure their nephew, Mortimer Brewster (Brian Artman), the only member of the family who seems to have avoided the Brewster penchant for galloping insanity. Tom Smith directs Players' Arsenic and Old Lace, which will take the stage from September 6 to 15. To proceed directly to ticket-buying, click here.

And Heartland Theatre offers its first fall show as well, with the brooding neo-noir thriller Earth and Sky, by Chicago playwright Douglas Post, opening on September 12. Don LaCasse directs a cast that includes Karen Hazen as Sarah, a librarian and poet who finds herself way outside her comfort zone,  thrust into a scary urban landscape of cops and robbers, good guys and bad guys and guys in between, with all kinds of shades of gray. Local actress and poet Kathleen Kirk was in the original production of Earth and Sky, and she is acting as assistant director and dramaturg on this one. Read about Earth and Sky here, and check out the schedule of shows here. 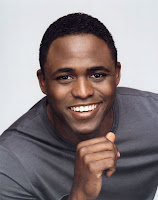 The always-amusing Wayne Brady pops up at the Bloomington Center for the Performing Arts on September 13 for one night only. I don't know about you, but Brady was always my favorite among the Whose Line regulars. (Note that if you made me pick one overall favorite, I would've gone for Chip Esten, but he wasn't there every week.) The BCPA tells us that Mr. Brady will be "doing what he does best... making funny stuff up off the top of his head! Funny with a sweet edginess… A night of laughter you’ll never forget." For ticket information, click here.

Eureka College Theatre is hosting a 24-hour play festival on September 14. I don't have details on how exactly they're structuring it, but other 24-hour play events have pulled playwrights and actors together in one place to brainstorm, create the play on the fly, rehearse it overnight, and then get it up on its feet the very next day. In other Eureka College Theatre news, their 2013-14 season will include The Complete Works of William Shakespeare (Abridged) from the Reduced Shakespeare Company September 26 to October 5, Aristophanes' The Frogs (with what sounds like puppets instead of a swimming pool, where The Frogs is usually performed) from February 25 to March 1, and the musical Godspell, with music and lyrics by Stephen Schwartz, from April 9 to 13, 2014. 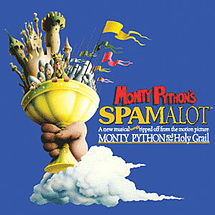 Back at Community Players, auditions will be held starting at 7 pm on September 16, 17 and 18 for Spamalot, the irreverent musical comedy "lovingly ripped off from" the movie Monty Python and the Holy Grail. Spamalot won the 2003 Tony Award for Best Musical and received 14 other Tony nominations. There are lots of roles in this one, from King Arthur to his coconut-carrying servant, Patsy, and Sir Lancelot, Bravely Bold Sir Robin (who is neither brave nor bold), Sir Galahad, the Lady of the Lake, the Black Knight (who is missing a few limbs), and the Knights Who Say Ni! Python Eric Idle wrote the book and the lyrics, collaborating with John Du Prez and Neil Innes on the music, and the score includes "Always Look on the Bright Side of Life," which was originally written for Monty Python's Life of Brian.

Illinois State University's theatre season jump-starts on September 27, when Spring Awakening, Duncan Sheik's alt-rock musical about sexual awakening and repression among turn-of-the-century teenagers, opens at the ISU Center for the Performing Arts. I did a post on who's who in director Matthew Scott Campbell's cast here, or you can find more details on the Facebook page for the event. Also check out ticket information here. Tickets for Spring Awakening are available at Ticketmaster and through the CPA box office at 309-438-2535.

I will be back with more of the September schedule for area theatre as information becomes available. Until then... Start making reservations!