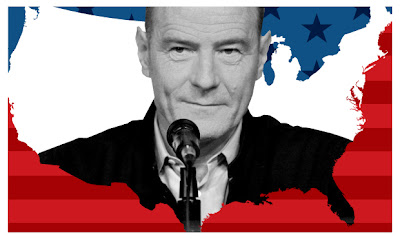 Broadway World is reporting that University of Illinois alum Brandon Dirden will play Martin Luther King, Jr., opposite Breaking Bad's Bryan Cranston as LBJ in a new production of Robert Schenkkan's All the Way opening tonight at the American Repertory Theatre in Cambridge, Massachusetts

All the Way won Schenkkan the Steinberg/ATCA New Play Award last April, after it was performed as part of the "American Revolutions: The United States History Cycle" project at the Oregon Shakespeare Festival in the summer of 2012. Schenkkan has shown before that he likes to delve into American history; his Kentucky Cycle, which takes a dark look at the state of Kentucky from its beginnings to the late 20th century, won the Pulitzer Prize back in 1992. All the Way explores the journey of Lyndon Johnson, "a Shakespearean figure of towering ambition and appetite," as he came to power and then "hurl[ed] himself into Civil Rights legislation, throwing the country into turmoil." When they awarded the play their New Play Award, the American Theatre Critics Association called All the Way "an engrossing, epic" play and described Schenkkan's portrait of LBJ as "complex, obscene, brilliant and ruthless."

Cranston knows a bit about "complex, obscene, brilliant and ruthless" after playing high school teacher/drug dealer Walter White on AMC's Breaking Bad since 2008. He earned three Emmy wins in a row in the Outstanding Actor in a Drama Series category for that role. On film, you'll find him in Argo and Little Miss Sunshine, and his television appearances include six years as the dad on Malcolm in the Middle, a recurring role as dentist Tim Whatley on Seinfeld, and way back when, a stint as good guy Doug Donovan on the soap opera Loving.

Brandon J. Dirden has an MFA in acting from the University of Illinois at Urbana-Champaign, as does his wife, Crystal A. Dickinson, who will play Coretta Scott King in All the Way. Dirden won an Obie for his role as Boy Willie in The Piano Lesson at Signature Theatre and his Broadway credits include Clybourne Park, Enron and Prelude to a Kiss. Chicago audiences may remember him from Magnolia at the Goodman.

Dickinson starred in Clybourne Park both on and off-Broadway, and she did Broke-ology at Playwrights Horizon and The First Breeze of Summer at Lincoln Center.

Others of note in the cast of All the Way include Reed Birney as Humbert Humphrey and Strom Thurmond, Dan Butler as George Wallace and four other roles, Peter J. Fernandez, Dakin Matthews, Ethan Phillips, and Michael McKean as J. Edgar Hoover and Robert Byrd.
Posted by JulieK at 12:44 PM