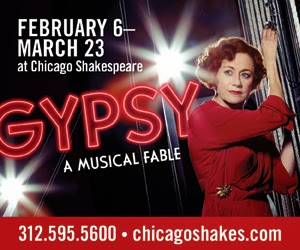 Director Gary Griffin has made a cottage industry of producing Stephen Sondheim shows at Chicago Shakespeare Theater at Navy Pier. Over the years, he's been at the helm of A Little Night Music, Pacific Overtures, Follies, Sunday in the Park with George... And now he's done double duty with Gypsy, the classic stage-mother musical from 1959 with music from Jule Styne and Sondheim lyrics, and Road Show, the newer piece that used to be called Wise Guys and Bounce and maybe even Gold before settling on Road Show. Gypsy was in CST's main Courtyard Theater through last Sunday, while Road Show opened upstairs on March 13 and runs till May 4.

Gypsy has been getting rave reviews during its run, with much praise of Louise Pitre, the one who played Mama Rose, the pushy, brassy, ballsy stage mother at the center of the show. It's a star turn to be sure, written for Ethel Merman, with the likes of Angela Lansbury, Tyne Daly, Bernadette Peters and Patti Lupone taking on "Rose's Turn" over the years. Bette Midler also played the role in a 1993 television version of Gypsy I quite liked. Not a big fan of Rosalind Russell in the 1962 movie, however.

And that's the thing with Gypsy. Its success lies almost entirely with the woman playing Rose. The plot, based on the autobiography of performer Gypsy Rose Lee, involves Mama Rose's continued struggle to push her daughter -- first the blonde and bubbly Baby June and then shy, awkward Louise, the one who turns into Gypsy Rose Lee -- into stardom in vaudeville. Rose's own dream to succeed in show biz makes her shove her kids, willing or not, onto increasingly grim stages, with a schlub of a manager named Herbie and an assortment of other starstruck chorus kids along for the ride. Rose is a force of nature, someone who pays no attention to anything but what she wants, but somehow manages to convince the people around her to go along for the ride. She can't manufacture stardom for her daughters, but she does get a foot in the door, and she does convince Herbie to take the scraps she dishes out. And that's why Bette Midler was so good, because hers was different from the other indelible performances, but still had charm and charisma to go with the muscle underneath. That Herbie could stick around, that Louise could knuckle under as long as she did... It worked.

Louise Pitre, on the other hand, was all muscle. Wiry and small, feisty and fierce, she played the role with a will of iron and no compromises. The warm, husky tone to her voice, reminiscent of Rosemary Clooney of all people, worked against the Iron Maiden persona, but that was the only thing that did. That meant that the chip on Rose's shoulder, the dysfunction in her past, was easy to imagine, but a reunion with her daughter and some sort of rapprochement at the end? Not bloody likely.

Strengths of this production included Kevin Depinet's scenic design, with a warped proscenium arch to give Chicago Shakespeare's Courtyard Theater and its thrust the atmosphere of an aged and worn out vaudeville stage, with all kinds of set pieces -- posters, chandeliers, show biz artifacts -- suspended in the fly space, acting as a representation of Rose's messy past and future, all literally hanging over her head.

The full orchestra this kind of show would've seen on Broadway -- 28 pieces -- was also pulled back to an orchestra of 14, intended to reflect the size of a vaudeville or burlesque orchestra of the time, according to Griffin's program notes. That change was successful for me, and certainly worked with the scene-stealing low-rent strippers Tessie Tura (Barbara E. Robertson), Mazeppa (Molly Callinan) and Electra (Rengin Altay) who popped up in the second act.

I was not as fond of the way the two big transition scenes built into Gypsy were staged. The first gives us Baby June and Her Newsboys magically transforming from children into young adults to show the passage of time without real changes to the act, while the second involves Louise moving from an awkward girl pushed into burlesque to the polished, glamorous Gypsy Rose Lee she becomes. Baby June becoming Dainty June was accomplished without magic at all, just the new corps arriving, greeting the younger versions of themselves, and then taking over, while the Louise/Gypsy change seemed to happen all at once, with actress Jessica Rush going out a kid, embracing her inner star almost immediately, and never really developing the act or showing off the trademark curtain move (where she disrobes and tosses the dress from behind the curtain with a certain flourish). Instead, she stood there in a nude body stocking with some glitter on her chest, revealing all. Neither transition was magical, let's put it that way.

Other bits of staging were more successful, with the musical numbers in general working well, and the big songs like "Everything's Coming Up Roses" and "Rose's Turn" blasting us into our seats with entertainment. And "You Gotta Get a Gimmick," wherein three sweet but sleazy strippers strut their stuff, brought down the house.

Program notes also tell me that for Road Show, Griffin has gone with the approach director John Doyle famously applied to Sondheim's Company and Sweeney Todd, where cast members played instruments to accompany themselves on stage. It's not my favorite idea. And it makes me not all that excited to see Road Show. But who knows? Maybe it will be just the ticket to bring that difficult material to life. At least Griffin keeps on trying with the Sondheim shows. And there's nothing wrong with that.
Posted by JulieK at 2:29 PM