Lots of shows have come back from their winter hiatus recently, with Once Upon a Time, The Good Wife, Revenge and The Mentalist all starting up again last Sunday alone. At the very same time, other beloved TV shows are bidding adieu. HBO's True Detective wound up its serial killer drama Sunday as well, while we're getting final bows from Shawn, Gus and Psych on March 26th and Ted and the gang at How I Met Your Mother on the 31st. Yes, that's right. After all these years, after Ted has told his children about years and years of his life when he did not meet their mother, he's finally going to get around to the big event. Except she may be dead. Or not. It's kind of a muddle. 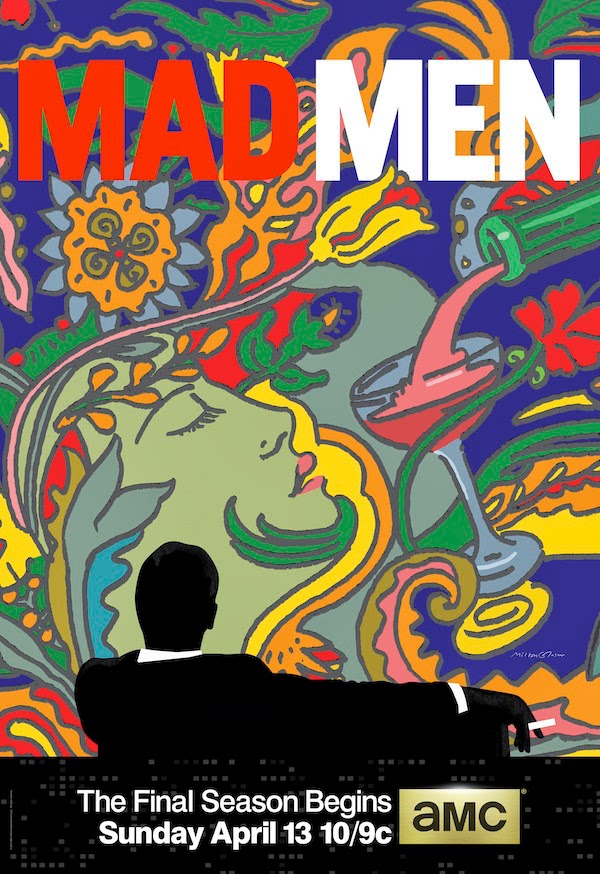 AMC's Mad Men is avoiding the mess that is March by launching the first half of its final season in April. April 13, to be exact. I've had fun over the years speculating on Mad Men's new season based on its iconic poster art. There was the Don all alone in the office season, as the new firm came about, the naked mannequin season, where women were treated badly by more than one Mad man, and the Duality of Don season, where his chickens came home to roost. This time out, its psychedelic Don, with poster art created by Milton Glaser, the celebrated graphic artist probably best known for his I Love NY image, the one with the heart instead of the word "love," or a 1967 Bob Dylan poster. TVLine reports that the man behind Mad Men, Matthew Weiner, had a Milton Glaser poster somewhere in his childhood home.

So what does this way-out, purple paisley pop art suggest? That drugs are in Don Draper's future? Or maybe his daughter Sally's, as she grows into part of the turn-on, tune-in, drop-out generation? Note the sloshy pink cocktail under "men," showing off Don's alcohol habit. And Don's sofa drape position harkens back to Season 1's poster, perhaps indicating that Don is right back where he started, even if the world around him has changed from the 1950s black-and-white punch-card milieu to a 60s psychedelic whirlpool. It's not clear whether he's on a Magic Carpet Ride or in the midst of a Purple Haze. Fantasy will set you free, Don. You've got me blowin' my mind. Is it tomorrow or the end of time?

I guess we'll find out more about that and other pressing questions about Don's job, which name he's going by, who he's schtupping, and what's happening to the ad agency he left behind when Mad Men returns April 13.
Posted by JulieK at 2:20 PM