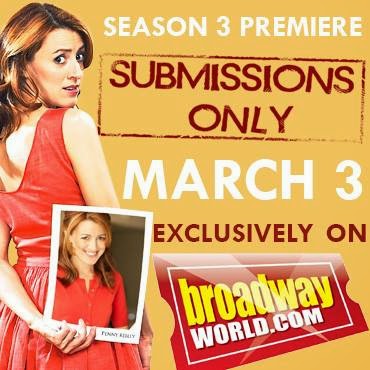 Everybody should know by now that I am mad for Submissions Only, the fun and fizzy web series about life upon (and outside) the wicked stage in New York. The title refers to the casting agency at the center of the show, the one that pulls together our heroine, actress Penny Reilly (Kate Wetherhead), who is a reader at the agency between roles, her best friend Tim (Colin Hanlon), who runs the place, and Penny's agent Steven (Stephen Bienskie), who used to have a thing with Tim. Penny also meets her current love interest, an adorable guy named Aaron Miller, played by the adorable Santino Fontana, when he, too, acts as a reader for a casting session. But Aaron gets a really good role, gets a girlfriend, one Serena Maxwell (Donna Vivino) who is fairly high up the food chain, and finds out his big break is a flop, all while he and Penny fail to get it together.

When we left them at the end of Season 2, they had admitted their attraction and even kissed, but he had neglected to break up with Serena AND Penny had been cast in a show with her. So that's awkward. The show is called Jeremy's Fort, which looks a great deal like Jeremy's Fart written on the callboard. Which is also awkward.

Episode 1 of this season didn't really fix any of that, although we did see Aaron and Penny and Serena gave Penny (and everyone else) a bunch of macarons, those popular and colorful little cookies that are all the rage. 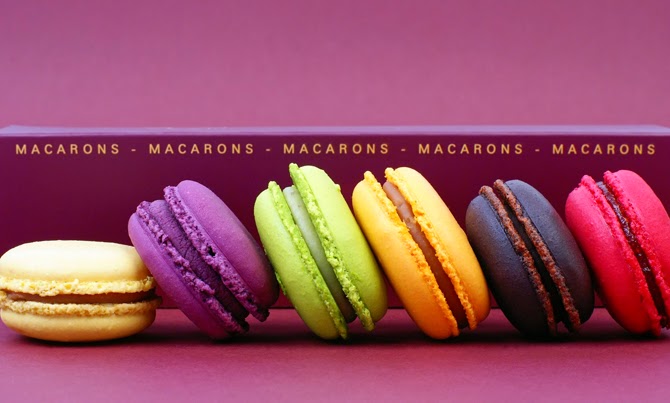 But the joy of Submissions Only is not the romance alone. Or the macarons. It's the inside, irreverent look inside show biz, as we see the different pieces of a career spent trying to get roles and then trying to keep them while maintaining some sort of personal life. And there are all kinds of bad, desperate and weird auditions, carried out by Broadway and TV stars we know and love. There are so many fab cameos it's getting tough to list them all, but suffice it to say you must just spot Danny Burstein, Bobby Cannavale, Kristin Chenoweth, Rachel Dratch, Jesse Tyler Ferguson, Hunter Foster, Joel Grey, Brian d'Arcy James, Kristen Johnston, Nick Jonas, Jeremy Jordan, Linda Lavin, Beth Leavel, Judith Light, Lin-Manuel Miranda, Adam Pascal, Roger Rees, Chita Rivera, Michael Urie, and most of the chorus of Newsies. Plus Anne L. Nathan and Max von Essen are on board as recurring characters. Jared Gertner was also there as a very, very perky reader named Randall, but we saw last time that Randall booked a gig on a cruise ship (to cover Gertner's absence -- he's in the national tour and London productions of Book of Mormon.)

There are also songs, dances and a lot of spoofy pieces of fictional shows.

The good news is that Episode 2 of Season 3 is available tonight between 8 and 9:30 pm Central time, back at BroadwayWorld.com. Submissions Only creators Wetherhead and Andrew Keenan-Bolger also invite you to tweet, using the hashtag #SubOnly3, after you've seen it. Or before. Or during. Whatever moves you. The Twitter party (which extends to Instagram and Facebook, if those are your social media of choice) is scheduled for 8 to 9 Central. Or, you know, 9 to 10 Eastern time. A show this NYC-centric probably should use Eastern time.

Submissions Only. Like having a career in New York theatre but getting to laugh at all the pain and rejection because it's happening to someone else.
Posted by JulieK at 3:13 PM