AUGUST: OSAGE COUNTY Has a Cast at Eureka College 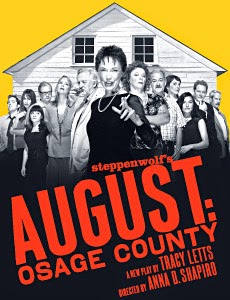 Tracy Letts' August: Osage County is one of the most celebrated plays of the 21st century. After the 2007 Steppenwolf production in Chicago, the play took home seven Joseph Jefferson Awards and went straight to Broadway, winning six Tonys and nine other New York awards, plus a Pulitzer Prize for Drama. Anna D. Shapiro, who was recently named Steppenwolf's Artistic Director, directed August: Osage in Chicago and New York.

Joel Shoemaker, a Eureka College alum, will direct August: Osage County for his alma mater with performances in April, 2015. Shoemaker's cast will include Christopher Tam and Stephanie Sager as Beverly and Violet Weston, the patriarch and matriarch of a deeply troubled Oklahoma family.

The plot of August: Osage County kicks in when Beverly Weston disappears and the three Weston daughters, Barbara, Ivy and Karen, along with Violet's sister Mattie Fae and various other in-laws and offspring arrive, ostensibly to offer support to Violet.

For Eureka, the three sisters will be played by Kayla Pulliam, Alexis Godbee and Emilie Dierks. Austin Bristow II will take on the role of Barbara's husband, with Ashleigh Feger as her teenage daughter. Nathan Bottorff will play Steve, Karen's fiance, along with Sarah Hall as Mattie Fae, Drew Carter as Mattie's husband Charlie and Austin Travis her son Little Charles. Completing the cast are Isabella Anderson as a caretaker for Violet and Jason Punke as the local sheriff who also happens to be Barbara's high school boyfriend.

If you are curious to see how all three stories of Weston family dysfunction will fit on the stage at Eureka College's Pritchard Theatre, you will have to wait till April. But you'll want to keep an eye on Eureka's Facebook page and theatre webpage to stay current in the meantime.
Posted by JulieK at 1:01 PM