SMASH's BOMBSHELL Back for a Benefit 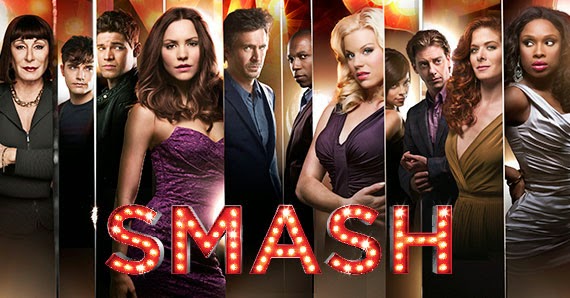 When NBC started touting Smash, the 2012 TV show that promised to go backstage during the creative process of a Broadway musical, it  sounded like a Broadway fan's dream come true. Smash mixed television personalities like Debra Messing and Katharine McPhee with well-regarded film actors (Jack Davenport, Anjelica Huston) and legit Broadway luminaries (Megan Hilty, Christian Borle) and its creative pedigree was just as promising, with Theresa Rebeck, a playwright and screenwriter who knew her way around the stage and television, as well as Marc Shaiman and Scott Wittman, the Tony and Grammy Award winners who wrote the score for the musical Hairspray, on the team.

But there were cracks in the Smash facade right from the get-go. The musical within the musical, the prize everybody was trying so hard to get on its feet and two leading ladies were trying so hard to snare the starring role in, was called Bombshell. And it was about Marilyn Monroe. Not like that hadn't already been tried. The Broadway Marilyn lasted a whole 17 performances. Bombshell, indeed. Or maybe just Bomb.

Plus the two rivals for the role of Marilyn Monroe, the linchpin storyline, were a huge mismatch. Hilty looked and acted like a Monroe type as well as a Broadway star, while McPhee was limp and listless and clearly wrong for the role. But the scripts (and the characters who were supposed to be Broadway pros) kept touting McPhee's Karen as a phenom and giving her accolades, while treating Hilty's Ivy Lynn like something to be scraped off the bottom of one's shoe. It was actually sort of bizarre.

And then there was Messing's character. A mom, a songwriter, a crazy lady wrapped in scarves... Messing had a huge TVQ left over from Will and Grace, but Julia, her Smash character, was awkward and unpleasant, and she got what may've been the worst love scene in TV history.

Smash had its highlights, too, of course. Hilty knocked several musical scenes out of the park, guest stars like Bernadette Peters, Liza Minnelli, Jesse L. Martin and Jennifer Hudson were brought in to try to ramp up some excitement, Christian Borle was dynamite with everything he was given, and I will never be sorry to see Jack Davenport.

And quite a few people professed a desire to see Bombshell, the musical they were all working on in the first season of Smash, as an actual musical on stage, with Shaiman and Wittman's songs and the terrific numbers we got to see pieces of.

If that was your dream -- to actually witness Bombshell -- you will need to make arrangements to get to New York in June of next year. The Actors Fund and producers Craig Zadan and Neil Meron are putting together a one-night-only benefit concert of Bombshell scheduled for June 15, 2015, with Megan Hilty and the Shaiman/Wittman Bombshell songs we heard on Smash.

The rest of the cast and the venue have yet to be announced but Broadway World, which broke the news, advises keeping an eye on the Actors Fund site for details..
Posted by JulieK at 12:47 PM