Ring in December with Cary Grant, Holiday Movies and Spectacularity

You don't have to wait till Christmas to open these gifts. Yes, it's true -- the good stuff in December starts tonight.

It's Cary Grant Month on Turner Classic Movies all during December, and because December 1 is a Monday and Mr. Grant has a monopoly on Monday nights, the celebration begins tonight. TCM begins its Carypalooza with a pile of the early ones -- his feature film debut in This Is the Night (1932), two Mae West vehicles with She Done Him Wrong (1933) and I'm No Angel (1933), a war film called The Eagle and the Hawk (1933) where Grant serves as a rival for flying ace Fredric March, Hot Saturday (1932), a piece about the danger of small-town gossip, Suzy (1936), with Jean Harlow, and by the time it turns into December 2, The Toast of New York (1937), a historical piece about a robber baron in the 19th century, and Night and Day (1946), where he plays a very unrealistic version of songwriter Cole Porter. Things get even better later in the month, when the Cary Grant persona we all expect is on full display, with highlights like The Awful Truth, Bringing Up Baby, Gunga Din, Holiday, The Philadelphia Story, and North By Northwest. Check out the complete listing here.

As if it wasn't enough for TCM to give us all that Cary Grant, they're matching it with Ingmar Bergman movies wall to wall on Wednesday December 3. Bergman movies are in a different universe from the Hollywood fare featuring Mr. Debonair, but serious film buffs need to see Smiles of a Summer Night, the charming film that inspired A Little Night Music, the beautiful and pensive Wild Strawberries, The Seventh Seal and its exploration of life, death and a medieval game of chess, and the intense psychological dramas Through a Glass Darkly, Winter Light and The Silence.

You can also get traditional holiday fare like The Nutcracker ballet, playing from December 4 to 7 in the Tryon Festival theatre at Krannert Center for the Performing Arts in Urbana. This one is performed by the Champaign-Urbana Ballet with the Champaign-Urbana Symphony Orchestra with conductor Stephen Alltop. 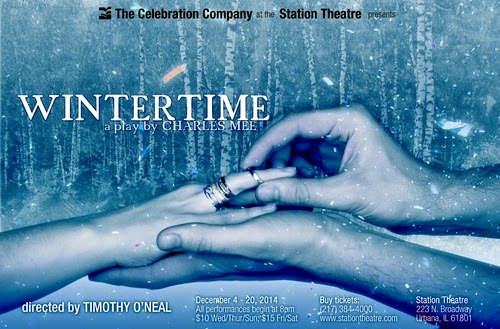 And on December 5, you can see Live Window Vignettes from members of Playwrights Anonymous as part of First Friday celebrations in downtown Bloomington. These window plays will happen at 5:30 pm on Friday at the Herb Eaton Gallery. Click here to see Playwrights Anonymous's Facebook page.

That Friday is also the day the Holiday Spectacular returns to the Bloomington Center for the Performing Arts. It really is spectacular, with a cast of thousands (okay, at least a hundred) including tappers, angels, wooden soldiers, father/daughter numbers and some fantastic voices, like Bob Mangialardi and Joe Penrod. The BCPA promises "all the blockbuster features that long-time attendees have come to love, such as the precision-dancing wooden soldiers, the mass choir nativity and an all-male a capella group" plus a whole bunch of surprises.

If you enjoyed seeing the Battling Gridleys as portrayed by Kathleen Kirk and Jeremy Stiller in October's Discovery Walk at Evergreen Cemetery, you can see Kirk and Stiller back in those roles when the newly restored Gridley Mansion is opened to the public for a holiday tour. You can read about the historic home renovation here. Owners Keith and Diane Thompson have partnered with Easter Seals to offer this mansion tour from 5 to 7 pm on December 11. The cost is $10 per person, with all proceeds going to Easter Seals. The tour of the premises at 301 East Grove Street will include work from local artists, info from Lincoln experts and light refreshments.

And that's just some of the entertainment available to keep you in the holiday spirit.