Get Stuck on STICKY This Friday at Firehouse Pizza and Pub 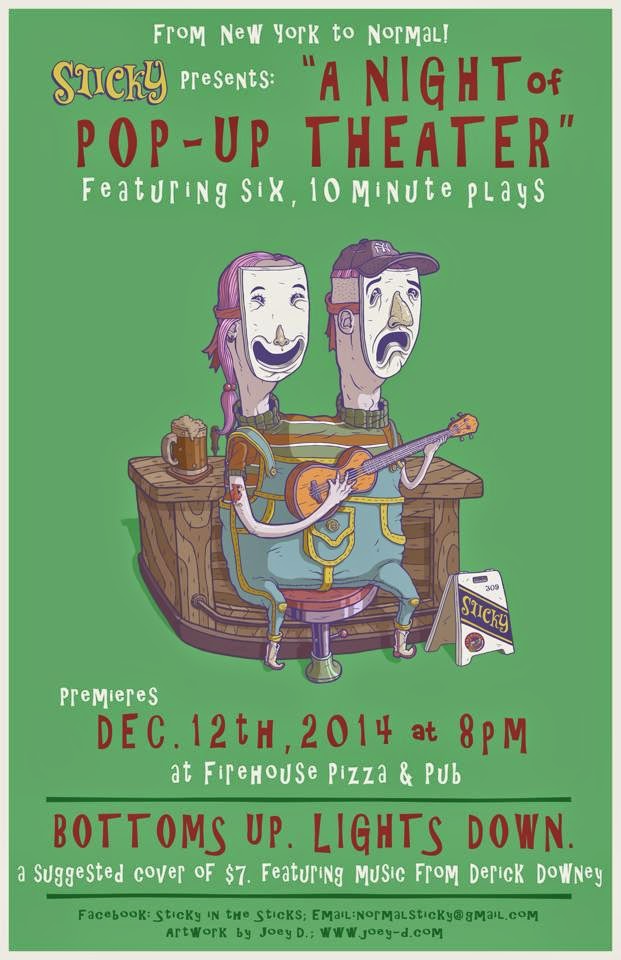 J. Michael Grey and Connie Chojnacki Blick first brought Sticky in the Sticks, a site-specific piece of "pop up" theater, to the Firehouse Pizza and Pub in Normal in November. They'd planned to do a program of ten-minute plays, all set in bars and performed at a bar, on a monthly basis. And here they are, with their second set of Sticky plays ready to go this Friday.

Grey had a Sticky connection when he lived in New York City, and he thought it could be just the ticket to round out the theater scene in Bloomington-Normal. Playwright Libby Emmons created the concept and she continues to produce Sticky performances -- Secret Sticky -- in New York. You will also see her name as one of the playwrights nabbed for our own Sticky in the Sticks. (See below.)

But before J. Michael and Connie decided to launch Sticky in the Sticks, there was nothing like Sticky in this area. We have college theater at Illinois State and Illinois Wesleyan, first-class Shakespeare at the Illinois Shakespeare Festival, a black box with more challenging, provocative fare at Heartland Theatre, community theater at Community Players, a spotlight on diversity and underserved voices at New Route, children's theater at Seedling, and even a historical focus at Illinois Voices Theater. But we don't have ten-minute plays set at a bar, do we?

Well, we do now! The program for Friday's show, which begins at 8 pm at Fireside Pizza and Pub, looks like this:

YET TO BE WRITTEN
By J. Michael Grey
Directed by Cathy Sutliff
Cast: Nancy Nickerson, Jake Rathman and Rachelle Wilson

Doors will open at 7:30 pm for Friday's show. The Sticky in the Sticks folks are asking for a $7 donation at the door. That's about $1.12 per play, which... Where are you going to get a play for that?

For more information about Sticky in the Sticks, click here to see their Facebook page.
Posted by JulieK at 2:12 PM