As part of this month's tribute to director Ernst Lubitsch, Turner Classic Movies is filling the last Friday evening in 2012 with four Lubitsch films. And these are good ones, too. Their glamor, romance and sly humor make them perfect End O' Year fare. 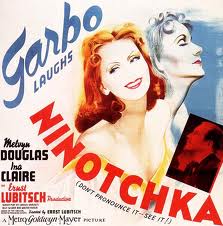 First up, in the marquee slot at 7 pm Central time is Ninotchka, the 1939 romantic comedy advertised under a "Garbo laughs!" banner. With a screenplay by Billy Wilder, Charles Brackett and Walter Reisch and the famous "Lubitsch touch" evident throughout, Ninotchka is lighter than air, witty and smart, taking on serious subjects (Capitalism vs. Communism, Russian expats, the grim rules and regulations of the Stalinist state) in the most charming possible way.

Greta Garbo stars as Ninotchka herself, an icy, uncompromising Communist envoy sent to Paris on Soviet business. She's specifically there to retrieve three comrades (played by Felix Bressart, Alexander Granach and Sig Ruman) who have been corrupted by the decadence and capitalist joy of Paris, as personified by Melvyn Douglas's Count Leon, who's been plying them with hot and cold running cigarette girls and room service in their luxurious hotel. He has ulterior motives, since he's involved with an exiled Russian Grand Duchess (Ina Clair) who wants to get back her confiscated jewelry, the very jewelry the three previous emissaries were supposed to be selling in Paris to pad the Soviet treasury.

Once chilly Comrade Ninotchka comes up against the debonair count and his pencil-thin mustache, she begins to thaw, going so far as to buy a frivolous hat, drink too much and spend the night in his arms. Will love prevail when the Grand Duchess steals back her jewelry? Will Ninotchka's sense of duty to the Soviet state force her to reject Leon's materialistic world? Will she ever find her way back to her Parisian count?

Ninotchka is one of those classic movies that fans of romantic comedy, fans of Lubitsch and fans of Garbo hold close to their hearts. Lubitsch went on to The Shop Around the Corner and To Be or Not To Be, the movie that will follow Ninotchka tonight on TCM, but Garbo did only one more film -- 1941's Two-Faced Woman -- before retiring from the screen completely. Ninotchka represents a world gone by, where even the hardest heart could be melted by silly jokes in a Paris sidewalk cafe. Lubitsch made Garbo laugh. And it was lovely.
Posted by JulieK at 1:26 PM