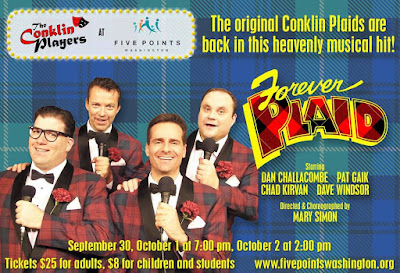 You may remember the intrepid troupe who put on shows at the Barn II Dinner Theatre in Goodfield. Mary Simon and her Conklin Players were forced to give up their friendly barn when storm damage made it unsafe for shows, but they've managed to keep the entertainment coming, moving their act to Five Points in Washington.

This time, Forever Plaid is on the bill, with performances September 30 and October 1 at 7 pm and October 2 at 2 pm, directed and choreographed by Simon herself. Simon has said that Forever Plaid, a musical revue involving a guy group from about 60 years ago that never quite hit the big-time, is her favorite show ever from the Barn. If you know who The Four Aces, The Four Freshmen or The Four Lads were, you're in the right ballpark for the tuneful boys in plaid.

But before the Plaids had the chance to compete with the likes of the Lettermen and the Hi-Los (or even to get an album out), they were in a bus accident and dispatched to the afterlife. For the purposes of Forever Plaid, the story is that they're returning to the mortal world to sing a little four-part harmony on hits you may recognize -- "Three Coins in a Fountain," "Love Is a Many-Splendored Thing," and, of course, "Moments to Remember" -- as they get one last shot at the brass ring. Or at "Heart and Soul," anyway.

The Plaids will be played by the same actors who took the roles at the Barn 19 years ago. If you saw it then, you already know you'll be seeing Dan Challacombe as Frankie, Pat Gaik as Jinx, Chad Kirvan as Smudge and Dave Windsor as Sparky.

Forever Plaid is a lot of fun and its song list can't be beat, whether you're into "Sixteen Tons" or "The Anniversary Waltz." If you'd like to turn on the Plaid version of the Wayback Machine, you can reserve tickets here on the Five Points site.