Yes, I know, it's already Labor Day Weekend and you're all headed outside for the last barbecue, the last camp-out, the last lounge by the pool during the Summer of 16. But September is officially the kick-off for a whole lot of theater seasons, which means there is a lot of good stuff starting right now. Good inside stuff. Without a need for bug spray. I'll try to hit all the TV premieres a little later, but for now... Cue intro music... It's theater time!

If you prefer to dip into Fall in a comedic frame of mind, you'll want to try Boeing Boeing, which opened last night at Community Players. It's a fast, fizzy farce about a womanizer in Paris in the 60s and the trouble he gets into when his three flight attendant fiancées all descend at once. This "non-stop comedy" is directed by G. William Zorn, with Dave Krostal as the free-wheeling bachelor whose love life includes hot-and-cold running stewardesses of different nationalities. Community Players' preview of their production is available here.

Heartland Theatre launches its fall season next week with Sunil Kuruvilla's Fighting Words, about three women in a small town in Wales in 1980 who are left at home while their hometown hero, a bantamweight boxer, fights for a world championship in Los Angeles. Don Shandrow directs Jessie Swiech and Lizzy Selzer as sisters Peg and Nia, women with very different but equally powerful aspirations, and Nancy Nickerson as their landlady, a woman who thinks she has made her peace with her own life and limited choices. Fighting Words opens with a "Pay What You Can" preview on September 8, followed by regularly ticketed performances through the 24th. More info about the production is available here, with show dates and times here. 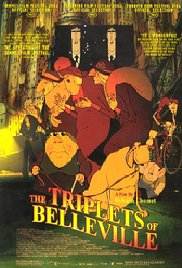 Krannert Center for the Performing Arts fuses music and the movies on September 15 and 16 in what they're calling "A Cine-Concert with Live Music" around The Triplets of Belleville, the Academy Award-nominated film from director/writer Sylvain Chomet. Composer Benoît Charest, who was nominated along with Chomet* in the Best Song category for "Belleville Rendez-Vous," will be on hand to conduct Le Terrible Orchestra de Belleville in a live performance of the film's score as the film is screened. For all the details, including un petit aperçu of the film itself, visit this page at the Krannert Center site. 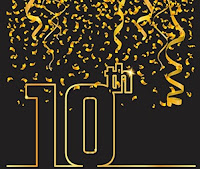 There aren't a whole lot of details yet about who is included in the group of "the area's finest actors, dancers and musicians" who'll be helping the Bloomington Center for the Performing Arts celebrate its 10th anniversary on September 16 at 7:30 pm. Whoever is included, A Toast to 10 promises "a glass of bubbly and a heartfelt look at a decade of performing arts." Click here for more information. 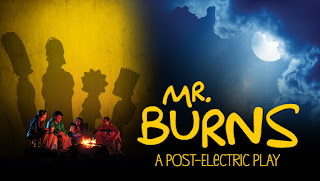 The singular theatrical experience known as Anne Washburn's Mr. Burns: A Post-Electric Play opens September 22 in the Meyer Jacobs Theatre at Bradley University in Peoria. In her play, Washburn fashions a dystopic future world where the people who've survived have no electricity, but they do have memories of a classic episode of The Simpsons to keep them warm, with echoes of pop culture taking on mythic and even religious significance over time. If you're interested in where theater is going in the new millennium or keeping track of rising playwrights, Mr. Burns should be a destination play. Washburn definitely made a splash with this strange, smart play. (Note that the image that accompanies this listing is from the ACT production in San Francisco in their 2014-15 season.)

The House of Blue Leaves, John Guare's 1971 Obie Award-winning play, takes the stage at Illinois Central College from September 23 to October 2. Guare's script is an absurd, crazy and off-kilter visit to Sunnyside, Queens, where a man named Artie has been trying to write a hit song forever. He has a wife named Bananas, a girlfriend named Bunny, and a whole lot of mishegas, as the Pope visits New York, nuns mistakenly visit Artie's apartment, and a bomb goes off in the midst of the mess. Yes, it's funny, but there's pain underneath all the weirdness.

Illinois State University's first play of the new season will be Waiora, by New Zealand playwright Hone Kouka, about a Māori family that moves from their small village to a larger city, upending their sense of family and home. Kim Pereira directs a cast that includes William Brown, Mac Byrd, Emilia Dvorak, Anastasia Ferguson, Anthony Harden, Emma Harmon, Brandi Jones, Alex Levy, Hannah Spohnholtz, Cayla Jones and Chloe Szot. Waiora opens in the ISU Center for the Performing Arts on September 30, with performances continuing October 1 to 9. For tickets, call the CPA Box Office at 309-438-2535 or visit them in person between 11 am and 5 pm Monday through Friday. (And the image accompanying this listing comes from a production of Waiora running right now at the Court Theatre in New Zealand.)

* The Triplets of Belleville was nominated as Best Animated Feature at the 2004 Oscars, while Benoît Charest (music) and Sylvain Chomet (lyrics) were nominated for Best Song for "Belleville Rendez-Vous."
Posted by JulieK at 9:15 PM