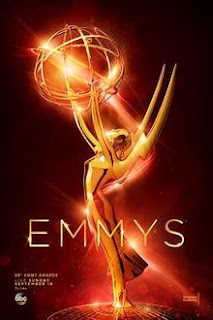 Last weekend, the Academy of Television Arts and Sciences gave out a big chunk of their Primetime Emmy Awards, in what they call the "Creative Arts" categories. The official definition for the Creative Arts ceremony is that it honors "outstanding artistic and technical achievement in a variety of television program genres, guest performances in weekly series, as well as exceptional work in the animation, reality and documentary categories."

More than 80 Emmys were handed out on Saturday and Sunday, in categories ranging from animation to casting, cinematography, costumes, editing, hairstyling, music, sound, special effects, stunt coordination and writing.

What's left for the big, star-studded ceremony coming up next Sunday? About twenty awards, the ones the Academy has deemed the Big Kahunas, I guess. Although it's hard to see why the award for Writing for a Variety Special, which will be awarded next week, is any bigger or cooler than Writing for a Variety Series, which was done yesterday. Or how there's any difference in the "artistic and technical achievement" they are to be celebrated for. But there you have it. The Academy can't honor a hundred folks in one evening, so they've gone for three.

Here are some of the highlights of the Creative Arts winners (with "highlights" as defined by me):

CHOREOGRAPHY
Kathryn Burns, Crazy Ex-Girlfriend (CW), for "I'm So Good at Yoga," "A Boy Band Made Up of Four Joshes" and "Settle For Me"

Note that Tina Fey and Amy Poehler were nominated as one entity in the Guest Actress category for hosting Saturday Night Live, and they won as one entity, too. That makes Emmy history.

And Peter Scolari wasn't among the nominees for Guest Actor in a Comedy Series when nominations were first announced. Peter MacNicol was there for his role on Veep, but it was subsequently determined that he was ineligible since he appeared in more than 50% of the episodes in Veep's season. The episode put him over the 50% limit aired after he was nominated, so his nominee status was revoked ex post facto. The Academy went back to the nomination ballots and gave Peter Scolari the slot instead. And he won.

Making a Murderer, the Netflix documentary about a criminal case in Wisconsin that seemed rife with injustice, was a big winner, taking home four Emmys in the six categories in which it was nominated. It won for overall Outstanding Documentary and its writing, as you see above, as well as Outstanding Directing and Picture Editing.

Last weekend's festivities will be broadcast in an edited version on the FXX network on Saturday, September 17 at 8 pm Eastern/7 pm Central time and again at 10:30 pm Eastern/9:30 Central. The splashier ceremony will air live at 7 pm Eastern/6 pm Central on Sunday, September 18, on ABC.
Posted by JulieK at 1:21 PM