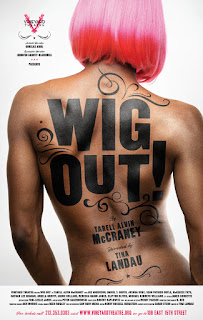 Tonight is the first in a series of new play readings from Illinois Theatre, the producing arm of the department of theater at the University of Illinois in Urbana-Champaign. This project, called Going Broader and Deeper: New Play Reading, focuses on one play each semester, and is offered free of charge. No tickets necessary, in other words.

The play reading will take place at 7:30 pm in the Studio Theatre, the small black-box space in the Krannert Center for the Performing Arts. Actors will read from scripts, but you can expect no costumes, props or staged movement. After the reading, audience members are invited to stay in the theater for a discussion.

Interestingly, the material chosen for this New Play Reading is not what I would call new. Tarell Alvin McCraney's Wig Out! — a play New York Times critic Ben Brantley called a "gutsy, pulsing portrait of uptown drag queens and the men who love them" — was one of seven pieces chosen for development at the Sundance Theatre Institute in 2007, with subsequent productions at New York's Vineyard Theater and at the Royal Court in London in 2008.

The image you see above is the poster from the Vineyard Theater production, while the one below is the cover of the printed script. They both give a good indication of the play's subject matter, which involves a dysfunctional family of drag Cinderellas who live together at the House of Light and what happens when they walk off against House Di'Abolique at a midnight drag ball. 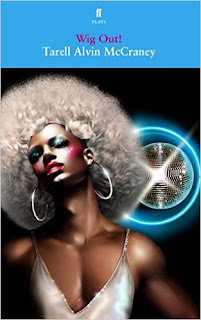 Even with a major New York production, Wig Off! is not all that well-known, not even within McCraney's own body of work, which earned him a MacArthur "genius grant" in 2013. His plays include the celebrated triptych of Brother/Sister plays and Head of Passes, which premiered at Chicago's Steppenwolf Theatre in 2013. McCraney and frequent director Tina Landau are both members of the Steppenwolf ensemble.

New or not, Wig Out! works with the rest of Illinois Theatre's New Play Reading mission, which states:


In order to hear the voices of new playwrights — and in particular, writers from underrepresented populations — Illinois Theatre will present readings of new plays once each semester. An informal setting will allow audiences to experience this work and engage in discussion about the content.

It may be that McCraney has updated or changed Wig Out! since those initial productions back in 2008, that it seems especially timely right now, or that its issues fit so perfectly into Illinois Theatre's 2016 season of "identity, family, history and the stories people tell to make sense of their lives" that they simply couldn't resist giving it a reading.

Look for the Illinois Theatre reading of Wig Out! at 7:30 pm in the Studio Theatre at Krannert Center for the Performing Arts. Admission is free.
Posted by JulieK at 12:44 PM