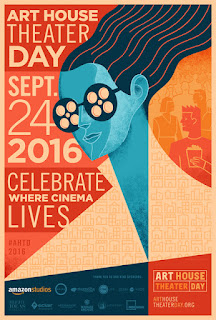 Art House Theater Day is a day set up to celebrate and "recognize the year-round contributions of film and filmmakers, patrons, projectionists, and staff, and the brick and mortar theaters that are passionately dedicated to providing access to the best cinematic experience." It's tomorrow, it's happening at 184 movie theaters across the country, and the two "art houses" closest to us will offer the movie Time Bandits as their celebratory film.

Time Bandits will be screened at the Normal Theater at 1 pm and at the Art Theater Co-op in Champaign at 7:30 pm.

I love Time Bandits, a clever and amusing gem from 1981 directed by Terry Gilliam from a script by Gilliam and Michael Palin. Gilliam was the lone member of the Monty Python troupe from the United States. You didn't see him on telly as an actor as much as the others, but his surreal, off-kilter bits of animation (like the big foot that squashes people in the credits) were there to represent him even when he wasn't showing up as Knight with Chicken or Man Banging on Wall. After Python, he directed seriously strange films like Time Bandits as well as Brazil, Twelve Monkeys and The Fisher King. Intelligence, creativity and an unusual, singular vision mark the Gilliam oeuvre. 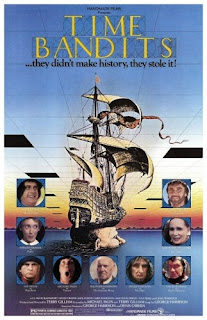 Given the title, you might expect Time Bandits to be about people stealing time. Au contraire. Instead, it's about a cadre of six dwarves trying to use portals in time to steal treasure. The thieves have a mysterious map that shows the location of these openings in time; they're intent on using the map to gallivant through history and scoop up loot from the likes of Agamemnon (Sean Connery) and Robin Hood (John Cleese) while staying ahead of the Supreme Being (Ralph Richardson) from whom they pinched the map. One of the holes is inside the bedroom of a young boy, who is pulled along on their mad dash through history, and... Mad dashing ensues.

The art direction is wonderful, the adventures are fun, the cast is excellent across the board, and Time Bandits is a one-of-a-kind movie. It is, in fact, a dandy film to use for Art House Theater Day.
Posted by JulieK at 12:14 PM