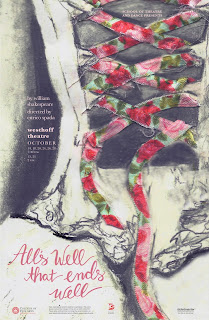 All's Well That Ends Well is not one of Shakespeare's most beloved or most frequently performed plays. While Midsummers and Macbeths come and go, it's not as easy to find an All's Well. In fact, the Illinois Shakespeare Festival has only done it twice, in 1988 and 1997, and you have to go back to the 1999-2000 season to find it at Chicago Shakes.

The reason why All's Well isn't at the top of the charts is probably because its plot is a bit wobbly and some of its major characters are more than a bit limp. That's especially true of Bertram, who isn't much of a hero as we see him, even if he is in the eyes of heroine Helena, who yearns for him mightily. In contrast, Helena is plucky, smart and virtuous. She may be smitten with Bertram, which is decidedly a weakness, but she also knows what she wants and isn't afraid to get it, and she can travel by herself, even through war-torn areas, come up with a fairly crazy (but successful) plan to nab the man she wants, and cure the King of France from a mystery illness without breaking a sweat. Helena is, in short, a pretty cool girl.

But Bertram... Why is she so enamored of Bertram? He really doesn't like her, he's rude and immature, he comes on strong when he sees a virgin he wants to score with, and he hangs out with (and listens to) a lowlife braggart and coward that everyone else sees through. That would be Parolles, one of Shakespeare's most tiresome characters.

For Illinois State University's School of Theatre and Dance, MFA director Enrico Spada looks to solve some of the problems with Bertram (played by Robert Hunter Bry) and Parolles (played by Daniel Balsamo) by setting the play in mid-18th century France, at a time when fashion was about excessive feathers and frippery and philosophers were spinning new ideas about personal liberty and the pursuit of happiness. That works well to explain why Bertram is a self-absorbed twit -- he is chafing at having to do what people in charge want him to and expressing his idea of freedom, after all -- and makes Parolles' appearance as a painted, powdered popinjay right on the money.

As played by Paige Brantley, Helena is a headstrong, forthright and no one's idea of a girly girl. Because Bertram is snobby and silly, it also makes perfect sense that she does not represent the girl of his dreams. At times, Bry's version of Bertram seems distant and oblivious to what's going on around him, and that works, too.

There are some lovely stage pictures here, framed and supported by Kim Lartz's elegant scenic design, which makes the most of Westhoff Theatre. Erica Maholmes' lighting design adds texture and mood, while Megan Wood's costume designs are fantastic. Sound designer Aaron Paolucci also makes a strong contribution with music that underscores the play's themes and Spada's choice of setting.

Dances added as a prologue and postscript, choreographed by Madeline Cleveland, are another welcome feature of this production.

Although I'm not sure All's Well That Ends Well will ever end up as anybody's favorite Shakespeare, this production is so pretty and Brantley is so appealing that it certainly makes an argument in its favor.