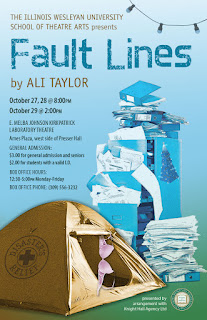 Playwright Ali Taylor is an up-and-comer in England and Scotland, but not so much performed in the United States. When his play Fault Lines opens tomorrow night at Illinois Wesleyan University's Lab Theatre, it will be the first time we've seen Ali Taylor's work hereabouts.

Taylor's voice is fresh, irreverent and funny, even as he tackles big, tough subjects like homelessness in his play Cathy, the desperation and anxiety of teenagers adrift in the world in Cotton Wool and Overspill, and the commercialization and competition involved in running an organization supposedly devoted to humanitarian aid in Fault Lines, which premiered at the Hampstead Theatre in London in 2013.

There are only four characters in Fault Lines, and they all work for Disaster Relief, a group that sees Oxfam, the real-life international aid group, as its biggest rival. The play takes place the morning after Disaster Relief's blow-out Christmas party, when Abi and Nick wake up in a tent pitched in the middle of the office. Their Christmas party antics -- and too much alcohol -- sent them into the tent for a little sexual revelry last night that they are now finding awkward to handle. But their Morning After is interrupted by an intern, Ryan, who announces there's been a new disaster -- a massive earthquake in Pakistan -- that Disaster Relief will have to address. They'll need to act quickly to get the jump on Oxfam and get the best press. Oh, and Pat, an older, more uptight member of the Disaster Relief staff, is arriving any minute, upping the pressure to get things done NOW.

There is competition between Abi and Nick to be the one who locates supplies for Pakistan first, as well as to outwit and outmaneuver Oxfam, and to meet the super-quick deadline Pat gives them. But nothing is as clear-cut as it seems when being No. 1 is more important than actually helping anyone. As the play's press materials put it, Fault Lines is "a razor-sharp new comedy that exposes the dilemmas of working in charity today and asks whether doing good is always the same as being good."

Considering just how many national and international disasters keep knocking us off our pins and how we judge the response from organizations like the fictional Disaster Relief, Fault Lines couldn't possibly be any more timely.

Fault Lines plays for only three performances in the E. Melba Kirkpatrick Lab Theatre, from October 27 to 28, with all performances at 8 pm. Tickets for Lab Theatre shows are $3 for the general public and $2 for students. Visit this page or call the IWU box office at 309-556-3232 for more information.