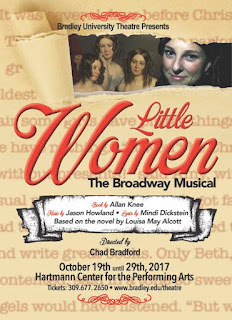 Bradley University Theatre opens its fall season tomorrow night at 7:30 pm with the Broadway musical version of Little Women, Louisa May Alcott's classic story that has remained popular (especially with young female readers) since the two volumes were first published at the end of the 1860s. The show will run through October 29 at the Hartmann Center for the Performing Arts in Peoria.

You may be aware of various dramatizations of Louisa May Alcott's Little Women novels, with play versions on Broadway as early as 1913, and movies ranging from the 1933 film starring Katharine Hepburn to one with June Allyson in 1949 and another with Winona Ryder in 1994. All of the actresses mentioned here played the role of Jo March, the writer at the center of Alcott's story. When Little Women begins, Jo and her three sisters are living in Massachusetts during the Civil War, with their father away in the war and their mother, called Marmee, attempting to hold the household together. Jo writes dramas (with the accent on drama) to keep her sister entertained, while a neighbor boy named Laurie joins in. As time passes, Jo grows and changes, as do her and her sisters' circumstances

The musical version features a score by Jason Howland (music) and Mindi Dickstein (lyrics), with book by Allan Knee. It ran on Broadway for 137 performances in 2004 and 2005, earning a Tony nomination for leading actress Sutton Foster along with three Drama Desk nominations.

For Bradley, Cassy Lillwitz will play Jo, with Rebekah Farr, Noelle Mefford and Leslie Allen as her sisters Beth, Meg and Amy. Derek Baunach will play Laurie and Trevor Baty will play Professor Bhaer, a professor Jo meets when she moves to New York.

Click here for more information or call 309-677-2650 for tickets. You can also see snippets of the Broadway show here.
Posted by JulieK at 5:01 PM