Indiana Rep's CURIOUS INCIDENT OF THE DOG IN THE NIGHT-TIME 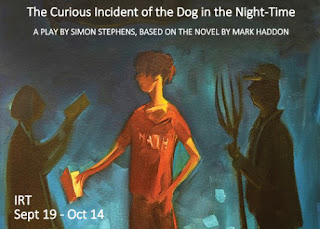 At its best, theater bridges the gaps in our attempts to communicate. It offers a view of the world we might not see otherwise, a view through others' eyes and ears. It is, in other words, a perfect vehicle for Mark Haddon's best-selling novel The Curious Incident of the Dog in the Night-Time, which set out to accomplish that in written form.

To tell his story, Haddon used a first-person narrator named Christopher Boone, a 15-year-old on the autism spectrum, as he tries to navigate a world he has difficulty understanding. Some things make perfect sense -- math, astronomy, geography -- while more ambiguous things like facial expressions or social niceties are baffling. When Christopher's neighbor's dog is killed, he is determined to figure out who did it, setting him on a journey of detection that uncovers more than just one mystery.

Playwright Simon Stephens adapted Curious Incident for the stage, with director Marianne Elliott (War Horse, the recent Angels in America at the National Theatre) and designer Bunny Christie collaborating to find a way to take a stage audience inside Christopher's head, to see events from his perspective. Their vision involved Christie's set design, aggressive lighting and sound by designers Paule Constable, Ian Dickinson and Adrian Sutton, and extensive ensemble work by the entire company of actors to give us a visual picture of the sensations Christopher experiences.

Technically, it was a huge show in London and on Broadway, piling up Olivier and Tony Awards. Indiana Repertory Theatre in Indianapolis is one of the few regional theaters so far to get a crack at Curious Incident of the Dog in the Night-Time and its technological challenges. It's one thing to create Christopher's world with every possible bell and whistle at your disposal, but how do you make it work with a smaller company like Indiana Repertory?

The answer for Indiana Rep director Risa Brainin and scenic designer Russell Metheny was to scale it back -- no flashy escalator, no magical drawers sliding out of the woodwork -- while maintaining the focus and the intensity of the play. Michael Klaers' lighting and Todd Mack Reischman's sound add layers of stimulus and sensation to ramp up the tension, and Brainin's staging showcases the work of movement coordinator Mariel Greenlee to maximize the space and the interactions among characters.

The show's biggest asset, however, is Mickey Rowe, the first actor with autism given the opportunity to play Christopher. Rowe carries the action from beginning to end, tapping into the character's sweetness and intelligence as well as his conflicted emotions. He also fills out the physicality of the role beautifully, whether it's a small, repetitive hand motion, carrying a pet carrier on his toe, pedaling a unicycle or stretching out in what seems like an impossible balancing act on a chair. There is a joy in Rowe's performance that celebrates Christopher and his differences even as it expresses his humanity and vulnerability.

The Curious Incident of the Dog in the Night-Time is a special play, given a thoughtful and emotionally expansive production at Indiana Rep. If you are in the mood for a trip to Indianapolis, this Curious Incident is well worth your time. Performances continue through October 14 at the historic Indiana Theatre in downtown Indianapolis.

Note for Central Illinois Theatregoers: Eric Parks, an MFA acting alum from the University of Illinois, is a member of the ensemble in this production.
Posted by JulieK at 12:23 PM