It's TRAVESTIES Time Tonight at U of I 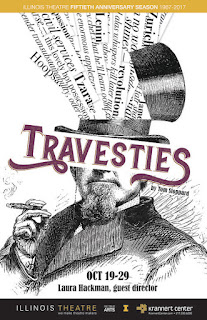 Tom Stoppard's Travesties is a whirl, even a whirligig, envisioning what might have happened if Vladimir Lenin, James Joyce and Tristan Tzara had run into each other while they were all in Zurich in 1917. They really were all in Zurich, but this fantasic meet-up in a library is pure Stoppard.

Stoppard didn't choose Zurich in 1917 just because they were all there, but because it was a seminal moment for each of them. Lenin was headed for revolution, Joyce was in the midst of writing Ulysses and Tzara was getting Dada off the ground. It's no surprise a play about their intersection would involve high-flying wordplay and razzmatazz to get at issues of politics, art, revolution, freedom of speech and freedom of the press.

Travesties isn't just about Lenin, Joyce and Tzara, however. There's another man, someone named Henry Carr, who forms the center of the play. Carr was a real person, also in Zurich in 1917, and he really did play a role in a production of The Importance of Being Earnest, directed by James Joyce. And after some disputes arose in that production, Carr and Joyce traded lawsuits.

In Stoppard's play, Carr is confused and fuzzy, moving back and forth between his older years and his memory of 1917. Carr's Swiss-cheese memories give the play its structure, as the characters throw limericks, sonnets and even a taste of vaudeville. ("Positively, Mr. Gallagher!" becomes "Positively, Gwendolen!" but it's vaudeville just the same) into the mix. Tom Hollander, who plays Carr in the current British production which will be transferring to Broadway next year, described the Travesties experience as being "bombarded by a glitter ball of different thoughts."

Director Laura Hackman brings Travesties to the Colwell Playhouse at Krannert Center for the Performing Arts in Urbana with Equity actor Christopher Sheard in the role of Henry Carr. Sheard is an alum of the University of Illinois theatre MFA program, and he brings a maturity to the cast that should work well for Old Carr and Young Carr.

Sheard will be joined by MFA actors Jessica Kadish as Gwendolen and Mark Tyler Miller as Joyce and undergrads Kevin Blair as Tzara, Katelin Dirr as Cecily, Diana Gardner as Nadya, Jordan Gleaves as Bennett and Patrick Weber as Lenin.

Travesties opens tonight with a 7:30 pm performance and runs through October 29. For performance information or to order tickets, click here. Illinois Theatre also makes the programs for its events available online, and if you want to see the director's or dramaturg's notes or read actor and design team bios, that's all right here.