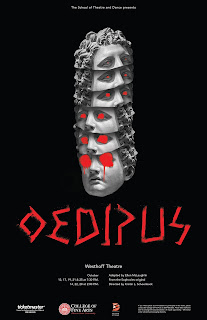 Greek tragedies can be tough to bring to life for modern audiences, but playwright Ellen McLaughlin* has a real knack for adapting classical works into something that seems fresh and new. She's really good at making old stories like the The Trojan Women or the miserable history of the House of Atreus seem newly dramatic and alive.

That is also true of her Oedipus, which Illinois State University's School of Theatre and Dance is performing in Westhoff Theatre in repertory with All's Well That Ends Well through October 28. McLaughlin's version of Sophocles' Oedipus is poetic and lively, with vivid images and evocative ideas. This isn't easy stuff, not when the central character is a doomed man, prophesied at birth to kill his father and marry his mother, and his tragedy entails a lot of back story to get to the devastating reality of how the prophecy plays out. A look at the bloody poster for ISU's production (above left) should make it clear that Oedipus himself will not emerge unscathed.

For Illinois State, director Kristin L. Schoenback has chosen to fuel her Greek chorus with music, composed and directed by Cristian Larios. There are echoes of spirituals, Appalachian ballads and folk songs and maybe even Gregorian chants in Larios's haunting music, delivered with emotion and truth by the ten members of the chorus. Tori DeLaney, Sarah Ford, Rondale Gray, Malachi M. Hurndon, Owen McGee, Will Olsen, Simran Sachdev, Leah Soderstrom, Al Vitucci and Bobby Voss are just as good with the spoken parts they're given as they are with the sung sections, making this one Oedipus where the Greek chorus is a great deal more than an afterthought or an exclamation point. They're right at the heart of this Oedipus and they're terrific.

The chorus is part of an attention to detail here that speaks well of Schoenback as a director; both her principal and supporting players are excellent as they navigate the murky waters of this tragedy.

Grant Brown, who plays Oedipus, is strong and passionate, even when he is called upon to show us Oedipus's weaknesses, and Sarah Seidler is as lovely and tragic as she needs to be as Jocasta, Oedipus's mother as well as his wife. She has one long monologue that works beautifully, as Seidler finds moments of softness and quiet to contrast the heavy weight of Jocasta's pain.

Troy Schaeflin is polished and skillful as Creon, the advisor Oedipus willfully blames for his woes, while Deanna Stewart brings blind prophet Tiresias to life with righteous anger, Matt Byrne finds all the layers and humanity in a messenger bringing good and bad news, and Madison Gillis is properly conflicted as a shepherd with more answers than she really wants to share.

Schoenback's overall idea for her production is on target throughout, as she brings Oedipus straight into today, with members of the chorus as ordinary street people you might see anywhere. Kim Lartz's scenic design contributes to that concept, showing us that Thebes is a city in trouble, where its once pristine pillars are now stained with mold and mildew as well as graffiti, while Nicole Kippen's costumes delineate the difference between haves and have-nots. We see immediately that Oedipus and his circle are turned out in crisp, stylish clothing, perfectly laundered and pressed, in contrast to the shabby sweats and layers of gray his poor subjects wear.

This is a sharp, pointed Oedipus, with words that hit close to home for America today.


If this is what you know of mercy, may you never be in need of it. Yours is a terrible nature, Brother. I would not have it for the world. Your great head is a locked box where you nurture grievance and shadow, startled by the echoes of your own frantic whispers coming back to you. Your reckless fury crackles like lightning through all your dark rooms. No, I don’t envy you, and never did, for all your power.

It's not hard to replace "Brother" with "Mr. President" or "Senator," is it?

*McLauglin is an actor, writer and teacher as well as a playwright. As an actor, she originated the role of the Angel in Tony Kushner's Angels in America.
Posted by JulieK at 1:57 PM