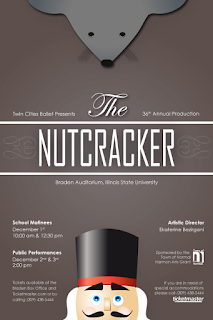 When Tchaikovsky wrote the music for The Nutcracker ballet, he could never have envisioned that it would become a holiday classic in the United States, with myriad performances in big cities and small towns everywhere. It seems to be especially popular around here. There are too many productions in Central Illinois to hit them all, but here are a few of your options:

The Littlest Nutcracker at the Normal Theater
December 1 at 6 pm, and December 2 at 2 and 6 pm
A local adaptation of Peter Tchaikovsky’s holiday favorite, featuring over 200 local dancers from Uptown Dance. "Take a trip to the Land of the Sweets with Clara and her Nutcracker Prince, onscreen and onstage in the second year of this new annual tradition at the Normal Theater."

Champaign Urbana Ballet at Krannert Center for the Performing Arts
December 1 through 10
Performed by the Champaign Urbana Ballet with Tchaikovsky's score performed live by the Champaign-Urbana Symphony Orchestra. "Join Clara, her Nutcracker Prince, and the talented young cast of the Champaign Urbana Ballet on a magical journey to a shimmering land of confectionary fairies, glittering global flair, and Tchaikovsky’s beloved score performed live by the Champaign-Urbana Symphony Orchestra." Recommended for ages 5 and up. Guests are invited to being new or gently used children's coats, mittens, gloves, hats, scarves, and ear muffs for Krannert Center's clothing drive. There is a special need this year for large and extra-large coats for middle school boys. All collected items will go to the Champaign Unit 4 School District and Urbana School District 116. Donation boxes will be available in the lobby near Intermezzo cafe.

Twin Cities School of Dance at Braden Auditorium
December 1, 2 and 3
The student company from the Bloomington-Normal dance school presents its 36th Annual production of the classic ballet. You can see their poster at the top of this post. For tickets, contact Braden Auditorium at 309-438-5444.

George Balanchine's The Nutcracker/New York City Ballet On-Screen
December 2, 3 and 5 at Bloomington's New Vision Ovation Cinema Grill
December 3 at Wehrenberg Bloomington Galaxy 14
Although many companies use portions of George Balanchine's famous choreography for The Nutcracker, it is still a treat to see the New York City Ballet's iconic production of Balanchine's "stunningly successful achievement." "Experience the wonder of New York City Ballet’s iconic holiday classic on the big screen. In George Balanchine’s The Nutcracker Tchaikovsky’s beloved melodies transport the young and young at heart to a magical world where mischievous mice besiege a battalion of toy soldiers, and an onstage blizzard leads to an enchanted Land of Sweets. Balanchine’s stunning choreography shines amidst awe-inspiring set pieces, ornate costumes, and grand one-of-a-kind visual effects, like the one-ton Christmas tree that grows to an astonishing 40 feet." You can see a video preview here.

USA Ballet Academy Nutcracker at Bloomington Masonic Temple
Tea: December 2 at 3:30 pm at the Vrooman Mansion
Performance: December 10 at 3 pm
The dance academy offers a special tea in addition to their performance. About the tea: "All guests will enjoy a tea party where they dine with the characters, get a sneak peak of the ballet with a mini-performance, listen to the telling of the Nutcracker story, have a sing-a-long, make a craft, have their photo taken with the characters, and leave with a surprise gift. All of the female guests will also receive a tiara and a corsage. It really is a great way to make memories, and the price also includes a ticket for the performance of The Nutcracker on December 10th performed by USA Ballet Youth Ensemble." And about the performance: "Our rendition of the holiday classic is very family friendly and suitable for all ages. Enjoying The Nutcracker is a wonderful way to get into the holiday spirit."

Fathom Event: Bolshoi Ballet On-Screen
December 17 at 12: 55 pm
You'll have to drive to Springfield to find a movie theater with this Fathom Event, but it is, after all, the Bolshoi Ballet. "As the clock strikes midnight on Christmas Eve, Marie’s wooden nutcracker doll comes to life and transforms into a prince! Soon joined by her other toys that have also come to life, Marie and her prince embark on a dreamy unforgettable adventure. A holiday tradition for the whole family, The Nutcracker enchants the Bolshoi stage for two hours of enchantment and magic. Along with Tchaikovsky’s cherished score and some of the Bolshoi’s greatest artists, The Nutcracker remains a treasure not to be missed!" Choreographed by Yuri Grigorovich, with a libretto by Yuri Grigorovich (after E.T.A. Hoffmann and Marius Petipa).

Chicago Festival Ballet at the Bloomington Center for the Performing Arts
December 28 at 7:30 pm
Renowned dancer and choreographer Kenneth von Heidecke brings his Chicago Festival Ballet to the BCPA. His Nutcracker promises, "powerful jumps, endless turns and beautiful costumes and sets. Dancing mice, toy soldiers and twirling sugarplums are sure to add magic to your holiday season!"

For more information about any of these events, click the link under the bolded heading.
Posted by JulieK at 5:04 PM