BEAUTIFUL: The Carole King Musical Returns to Chicago on a High Note 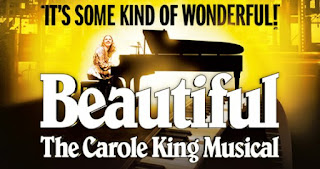 If you ask me to pick album that set the soundtrack for my life, it has to be Tapestry, Carole King's 1971 mega-hit. Its intimate ballads and emotional honesty went straight to my 14-year-old heart. That's an impressionable age when it comes to music, and Tapestry just happened to arrive at the perfect time, at the very moment I began to look for music that spoke to me personally. My copy of the album was warped on "I Feel the Earth Move," and when I played it every day after school on my parents' massive stereo cabinet, I assumed that the skips and bumps in that song were built into everyone's vinyl for that perfect "earth-moving" experience. I don't know how long it took to sort that out.

Even though I had every lyric memorized before I hit 15, I didn't know much about Carole King herself. She didn't do concerts, she didn't show up in teen magazines, and I never really thought about where she came from or how she got to the Tapestry place.

That's the story in Beautiful: The Carole King Musical, which takes an episodic journey from King's teen years in Brooklyn, when she was still pony-tailed Carol Klein, through romance and marriage, two kids, the heartbreak of a faithless husband who just happened to be her lyricist, rivalry and friendship with another song-writing duo, and finally, triumph as a singer-songwriter on her own with Tapestry. If it's a fascinating story, it's also not the easiest to frame on stage. There are limitations to this kind of jukebox storytelling, even when the songs stringing it together are as as amazing as "Will You Love Me Tomorrow," "Up on the Roof," "The Locomotion," "One Fine Day," "You've Got a Friend," "Natural Woman," and the warm, sad breakup manifesto, "It's Too Late."

Douglas McGrath, who wrote the book for Beautiful, uses every one of those songs to propel King's biography, adding in a subplot for Cynthia Weil and Barry Mann, who were working on pieces like "You've Lost That Loving Feeling" and "We Gotta Get Out of This Place" at the same time and in the same building King worked with her husband, Gerry Goffin. Since they were all toiling in Don Kirshner's song factory on Broadway, McGrath uses Mann and Weil and the competition for hits to kindle some dramatic tension. I'd have preferred sticking with Carole and Goffin without the side trips into Mann/Weil territory, but then again, I'm very, very partial to King's songs.

With or without Mann and Weil, Beautiful's success depends on the warmth and charisma of its leading lady to pull us through. On Broadway, Chicagoan Jessie Mueller projected just the right mixture of optimism and awkwardness to sell her Carole, winning the Tony as Best Actress in a Musical. That's a tough act to follow, but Sarah Bockel, the Illinois Wesleyan School of Theatre Arts alum who is at the piano on the second national tour, is also something special. She finds her own voice and her own version of Carole King, resulting in a compelling, authentic performance that channels King's heartfelt vocals and phrasing while still interpreting the songs her own way. She's terrific.

Andrew Brewer does fine work as Goffin, with excellent support from Sarah Goeke and Jacob Heimer as Weil and Mann and James Clow as Don Kirshner. The performers who keep stepping up as musical groups of the times, like the Shirelles and the Drifters, also deserve special mention. Josh A. Dawson, Jay McKenzie, Avery Smith, Kristopher Stanley Ward, McKynleigh Alden Abraham, Traci Elaine Lee, Marla Louissaint, Alexis Tidwell -- they're all terrific at recapturing a specific look and sound.