Tomorrow: PSYCH: THE MOVIE on USA 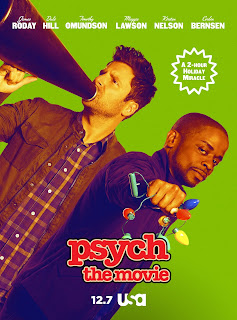 If you shed a tear when Psych took its final bow on the USA Network back in 2014, take heart. It wasn't that final after all.

Psych stars James Roday and Dulé Hill, along with familiar supporting players Corbin Bernsen (Henry), Maggie Lawson (Juliet), Kirsten Nelson (Chief Vick) and Timothy Omundson (Detective Lassiter) are all back on USA for a Psych movie. We will be clued in on what's happened to Sean, the goofy sleuth pretending to have psychic powers to solve crimes, and his more sensible best friend, Gus, three years after we left them. They're now in San Francisco instead of the familiar San Diego, but the wacky tone and general craziness we came to expect from the original series is firmly in place. Series creator Steve Franks and Roday wrote the script.

In this new chapter of their adventures, we can expect to see those two "ambitious friends -- along with some returning fan-favorite characters -- come together during the holidays after a mystery assailant targets one of their own. A comedic thrill-ride follows, as the wild and unpredictable Psych team pursues the bad guys, justice … and, of course, food!" They'll be joined by the police (Juliet, Lassiter and Vick) and parents (Henry, who used to be a cop) who've always surrounded them, along with guest stars like Zachary Levi, Ralph Macchio and Jimmi Simpson. There is no Cary Elwes, who played Pierre Despereaux, the best frenemy they had, which is a disappointment, but we're told maybe he may appear in future reunion pics. We can only hope.

Cue the pineapples: Psych: The Movie premieres on USA on Thursday, December 7 at 7 pm Central time.
Posted by JulieK at 12:23 PM