What I'm Reading: THE PERFORMING SET 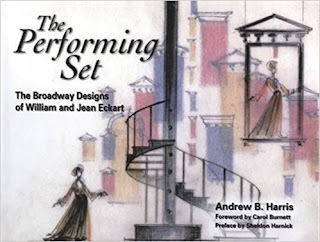 If you're looking for a last-minute holiday gift for someone with a theatrical bent, The Performing Set: The Broadway Designs of William and Jean Eckert, written by Andrew B. Harris, is a perfect choice. If Santa leaves you with cash or a bookstore gift card, you might consider putting a copy of The Performing Set under your own tree.

Broadway fans have a tendency to concentrate on shows and performers, sometimes famous composers or playwrights, as they collect cast albums and memorabilia to celebrate their favorites. But we don't hear as much about the designers. And that's where The Performing Set comes in. It tells the story of how we got to the place where technical elements stepped away from just being backdrops to take an active role in the experience, where scenery can look like fine art, where pieces slide, swoop, reconfigure and flow with the same rhythm as the music, where what's around the actors communicates the theme and mood of the piece rather than merely framing it.

I admit I'd never heard of William and Jean Eckart before The Performing Set, even though they designed the scenery for seminal shows like The Golden Apple, Anyone Can Whistle, Hallelujah, Baby! and Mame, scenery and lights for Li'l Abner and She Loves Me; scenery and costumes for Damn Yankees; and scenery, lights and costumes for Once Upon a Mattress and Fiorello!

They also produced the original Broadway production of Mattress and Jean Eckart personally sought out Carol Burnett for the lead. And they did scenic, costume and lighting design for a 1974 revival of Of Mice and Men starring James Earl Jones, designed the 1957 live TV Cinderella with Julie Andrews and the 1968 movie The Night They Raided Minsky's, did the costumes for The Pajama Game and Damn Yankees on film, and got a credit for the stage production scenery used in the Lil' Abner movie. They ended their careers in academia when Broadway went a different way in the Age of Aquarius, influencing new generations of designers at Southern Methodist University and in regional and summer theaters.

The Performing Set details all their ups and downs, how they met and got into theatrical design in the first place, and how their emphasis on using every design element to tell the story changed the process for everyone. From Abner's line of rickety cabins connected by clotheslines to Lola's famous "Whatever Lola Wants" peel-off capri pants to the vertical set they came up with to fit inside the postage-stamp-sized studio where Cinderella played, the Eckarts were evolving and changing how theater looked and moved. They didn't simply fall into the right place at the right time, but worked and innovated to come up with the right ideas to express who they were and what they envisioned theater could be in that place and time.

As author Andrew B. Harris concludes, "With wit and style, they had helped to shape the musicals that they had worked on and to give them a lightness and fluidity that allowed them to flow from one scene to another with a dreamlike rapidity. They had found a way to substitute  imagination for literalism and to translate naturalism into representational language that both stimulated and challenged audiences."

One strength of The Performing Set lies in its copious illustrations and photos, giving a clear look at their evolving style and artistic sensibilities. The ground plans for the complicated revolves and stairs in She Loves Me and Mame are fascinating, while some of the art in the book is worth framing on its own. I especially liked the the modernistic costume sketch Jean Eckart did for her thesis project on Peer Gynt, a dandy Glamour magazine fashion ad with stylish ladies in black suits against red set pieces, a gorgeous translucent backdrop designed for The Golden Apple, and a series of fetching costume sketches with fairytale whimsy created for Cinderella and Once Upon a Mattress. If I didn't mind hacking my book apart, I really would take out the one with Cinderella carrying packages and frame it.

Harris has helpfully included a chronology of the Eckarts' efforts from 1951 with The Little Screwball at the Westport County Playhouse in Connecticut to Bill Eckart's solo effort on a production of Macbeth he didn't live to see in 2000. Each entry has a picture, too, just to give us a hint of what the design was. That's pretty amazing, to consider five decades of artistic expression played out across 18 pages.

The Performing Set is a pretty book, but it's more than just pretty. Its story fills in the backstage blanks on how the Broadway of today came to be.

The book was published in 2016 and is available at Amazon and Barnes and Noble.
Posted by JulieK at 3:41 PM

Email ThisBlogThis!Share to TwitterShare to FacebookShare to Pinterest
Labels: Andrew B. Harris, Damn Yankees, Mame, She Loves Me, The Performing Set, William and Jean Eckart