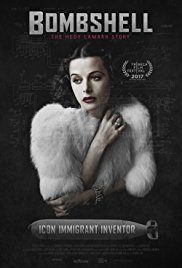 The Normal Theater has chosen to close out 2017 and open 2018 with three movies that trace the career of one of the most beautiful women ever to grace a Hollywood screen. Hedy Lamarr's luminous beauty jumps off the screen in both Ziegfeld Girl, a potboiler from 1941 with Judy Garland and Lana Turner alongside Lamarr as women chasing rainbows and putting their virtue on the line to make it in show biz, and The Conspirators, a 1944 spy thriller starring Paul Henreid and Lamarr against a backdrop of Nazis and the Resistance in Lisbon during World War II. 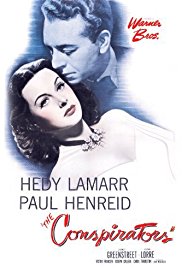 Ziegfeld Girl played Thursday night at the Normal Theater and it's repeated this afternoon at 1 pm, while The Conspirators is up January 4th and 6th at 7pm.

If you need proof that Lamarr was gorgeous, you'll find it in either of those films as well as any number of images scattered across the internet. But there was a lot more to Hedy Lamarr than her stunning looks, and that's what a documentary called Bombshell: The Hedy Lamarr Story is all about.

It's hard to be taken seriously as an inventor when you look like Hedy Lamarr, Vienna-born actress and Hollywood star. In fact, the story goes that when Lamarr tried to join the National Inventors Council to help the American effort in World War II, she was basically patted on the head and told she should stick to being pretty and selling war bonds and leave important war stuff to the big boys.

But that didn't stop her. And she and a "bad boy" pianist named George Antheil came up with something called "frequency hopping spread spectrum" broadcasting that scholars have deemed the forerunner to current GPS, Bluetooth and Wifi technology. Hedy called it "tinkering." We call it "genius." Whatever you call it, it meant that Hedy Lamarr was a pioneer -- an unsung, unwanted pioneer -- on the electronic frontier.

Lamarr's off-screen brilliance -- as well as the intriguing fact that nobody really paid any attention to it -- is the premise of Bombshell, with director /writer Alexandra Dean striving to paint a more complete picture of this enigmatic, complex "icon, immigrant, inventor." And all-around amazing woman.

Bombshell: The Hedy Lamarr Story is on screen at the Normal Theater tonight at 7 pm, with repeat showings on January 5 and 7 at 7 pm.
Posted by JulieK at 12:05 PM