Tonight's the night to see the annual broadcast of the Kennedy Center Honors. It's always a good show, as honorees from various walks of the entertainment business are celebrated through clips, performances and laudatory speeches from their peers, who are also show biz greats.

This year's honorees are actress, dancer and choreographer Carmen de Lavallade; "singer-songwriter, actress, philanthropist, author, and overall hyphenate" -- as well as seven-time Grammy Award winner and the subject of a Broadway musical -- Gloria Estefan; rapper L L Cool J, who also stars in NCIS: Los Angeles, hosts and produces the TV show Lip Sync Battle, and has his own radio station in the works; TV legend Norman Lear, probably best-known for developing and writing hugely influential series like All in the Family, Good Times, One Day at a Time and Sanford and Son, but he's also produced movies, including The Princess Bride; and music icon Lionel Richie, who has written and performed his way to over 100 million albums sold as well as an Oscar, a Golden Globe, and four Grammy Awards, with songs like "Endless Love," "Hello," "Say You, Say Me" and "We Are the World" on his glittery resume.

Left to right in the image below, you'll find Richie, Lear, de Lavallade, LL Cool J and Estefan. To read more about these megastars and their accomplishments, click here. 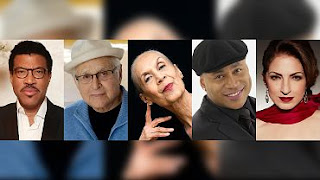