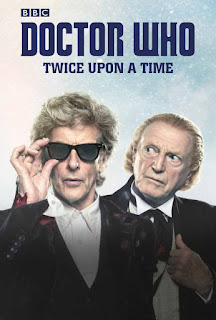 Peter Capaldi has brought a different energy to Doctor Who, that's for sure. He will go out (or regenerate) in style in Doctor Who: "Twice Upon a Time," a special Who movie screened in theaters nationwide next week. It's also the end of the Who road for Stephen Moffat, who has been executive producer and head writer since 2008. He wrote this episode.

As a send-off for both Capaldi and Moffat, "Twice Upon a Time" has earned a big-screen splash. Here's the official tagline: "The epic finale to the Peter Capaldi era of Doctor Who, 'Twice Upon a Time,' is coming to cinemas for only one night, featuring the return of Pearl Mackie and special guests Mark Gatiss (Sherlock) and David Bradley (Filch in the Harry Potter movies)."

It's actually in cinemas two nights -- December 27 and 28 -- here in Bloomington, but if you can't wait for the big screen treatment or you want to see it more than once, it will be screened on television on Christmas Day. In the UK, it airs at 5:30 pm, while in the United States, it's scheduled for 8 and 11:40 pm Central time on BBC America.

As you can tell from the poster, the current Doctor, Peter Capaldi, will have to match wits with the very first Doctor, now played by David Bradley. It's fitting to put Bradley in the role since he played William Hartnell, who really was the first Doctor, in a 2013 TV movie about the beginnings of the Who universe.

We are promised tears, joy and a moving farewell in this meeting of alpha and omega doctors, neither of whom wants to say goodbye, set against a World War I story about two soldiers on opposite sides. If you'd like some a few hints or even minor spoilers, you can click under those links. And the trailer, as well as the cast list and more info about the plot, are available here and here.

In Bloomington, Doctor Who: "Twice Upon a Time" will play at 7 pm on December 27 and 28 at the Ovation Cinema Grill and the Bloomington Galaxy Cine 14. You can buy tickets ahead at the Fathom Events site if you're so inclined.
Posted by JulieK at 4:33 PM