Opening Tonight: CHRISTMAS AT PEMBERLEY at the Station Theatre 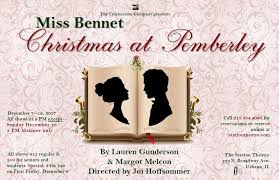 Last month, The New Yorker called Lauren Gunderson the most popular playwright you've never heard of. With an Steinberg/ATCA Award for I and You, the 2016 Lanford Wilson Award from the Dramatists Guild and the 2016 Otis Gurnsey Award, and nominations for the Susan Smith Blackburn and John Gassner Awards, Gunderson has emerged as a major force in American theater, so major that American Theatre recognized her as the most-produced playwright in the United States this year, ahead of people like Arthur Miller, Tennessee Williams and August Wilson.

A big part of Gunderson's popularity this year is Miss Bennet: Christmas at Pemberley, which she co-wrote with her friend Margot Melcon. This look at Jane Austen's Pride and Prejudice characters and how they might spend their holidays has struck a chord with theaters looking for a warm and witty option for their December schedules.

Urbana's Station Theatre will open their production of Christmas at Pemberley tonight, with performances running through December 16. As they put it, "As the holidays approach, revisit your favorite Pride and Prejudice characters as they gather at Pemberley, the home of Mr. and Mrs. Darcy. Middle sister Mary Bennet has come into her own as a confident woman full of curiosity and wit. But will her story end happily ever after? A true holiday delight, full of wit, warmth, and romance."