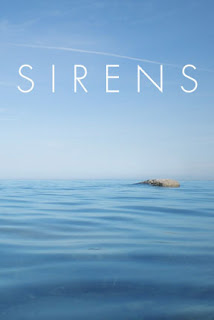 I don't think it's ever happened this way, but the first show I saw at this year's Humana Festival turned out to be my favorite of the festival.

Deborah Zoe Laufer's "Sirens" resonated with me on several levels, not the least of which was the long-married-couple-kvetching-about-what-to-do-for-their-anniversary opening scene. In that opening scene, Sam and Rose Abrams are sitting at a travel agency, trying to decide how they should celebrate their 25th wedding anniversary. But Sam is distracted, both by the nubile young travel agent who reminds him of his high school girlfriend, and by the hit song he can't quite reach.

A little more than 25 years ago, Sam wrote a song that was a huge hit. It was called "Rose Adelle," written for his very own Rose, and in the ensuing years, it's been covered by everybody under the sun, continuing to keep Sam's coffers full. (One of the conceits of the script is that different versions of "Rose Adelle," sounding like Perry Como one minute, then Springsteen or Blondie the next, fill the scene changes.) But Sam has been unable to write anything as big or as good as "Rose Adelle." Now he's turned to Facebook and Myspace to reconnect with his youth -- or maybe just some young women who remind him of his youth -- to find that elusive second hit.

Rose is annoyed with him and his midlife crisis, but she plans a cruise of the Greek isles to pull him back into their marriage and celebrate their anniversary. Unfortunately, once they’re out to sea, Sam hears a Siren’s call, the very song he’s been trying to pull together in his mind, and he tunes Rose out completely. Sam jumps overboard, washing up next to an actual Siren, just like the one who tortured Odysseus and his ship full of travelers, but she won’t sing her song for Sam. She’s not very nice in general, and she makes it clear that her one purpose in life is to sit on that island and belt her irresistible song at passing ships, making them crash and fall into the ocean.

She does have one other hobby, though. A handheld computer game of some sort floated her way, and she loves playing solitaire. That solitaire habit holds the key to Sam getting a ride home, but is also one of the funniest moments in the script, throwing today’s world into the crosshairs of Greek mythology.

Meanwhile, back in New York, Rose is furious that Sam jumped off a ship rather than pay attention to her, and she decides to do a little Facebook exploring of her own.

There are bits of the Odyssey in “Sirens,” which is appropriate for a commentary about long-married folks, and I like Greek mythology, so that all worked for me. I also enjoyed the small touches director Casey Stangl came up with, like dressing Sam and Rose in a matching vest and sweater, since Rose runs a knitting shop and is always seen with needles and yarn, working away. The knitting motif recurred in a vision of Rose Sam has while marooned on the Siren’s island and again late in the show, when she lashes him to the mast to ward off Sirens. Again, it came off imaginative and funny.

The many different versions of “Rose Adelle” worked for me, too, and I think composer Matt Callahan did a fine job creating a song that sounded like a hit single.

As Sam, Brian Russell was fun and schlubby, but also believable as a man trying to find what he once had. It was Mimi Lieber, however, who stole the show, as the original Rose Adelle. She was cute and spunky, as well as sympathetic and snappy, and I loved her performance.

Although his role was smaller, Ben Hollandsworth made a very good impression as a man from Rose’s past, and he certainly knew how to sell the long in “Long Island.”

Rounding out the cast, Lindsey Wochley did a fine job as the Siren, the travel agent and a random waitress, although the fact that her Siren was stuck on one rock and my seat was behind her meant that I missed about 90% of her Siren performance.

Actors Theatre’s black box Bingham Theatre has seating on all four sides, and that didn’t work all that well for this particular show, even though Michael B. Raiford’s bluer-than-blue scenic design with a railing or a vanity carried on and off by pretty girls was fetching and fun to look at.

I can see “Sirens” showing up in just about any theater, and I hope it has a long life in regional rep. The humor and warmth, as well as the understanding of what it means to be married a long time, are things that never go out of style.
Posted by JulieK at 1:16 PM