Pulitzer Prize Awarded to "Next to Normal" 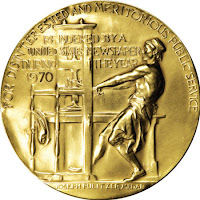 In a controversial decision, the 2010 Pulitzer Prize for Drama has been awarded to "Next to Normal," a musical about a woman with bipolar disorder and how she and her family struggle to deal with her illness. Tom Kitt wrote the music, while Brian Yorkey created the book and lyrics.

The Pulitzer Board deemed it to be, "a powerful rock musical that grapples with mental illness in a suburban family and expands the scope of subject matter for musicals."

Nominated as finalists in this category were “The Elaborate Entrance of Chad Deity,” by Kristoffer Diaz, a play invoking the exaggerated role-playing of professional wrestling to explore themes from globalization to ethnic stereotyping, as the audience becomes both intimate insider and ringside spectator; “Bengal Tiger at the Baghdad Zoo,” by Rajiv Joseph, a play about the chaotic Iraq war that uses a network of characters, including a caged tiger, to ponder violent, senseless death, blending social commentary with tragicomic mayhem; and “In the Next Room or the vibrator play,” by Sarah Ruhl, an inventive work that mixes comedy and drama as it examines the medical practice of a 19th century American doctor and confronts questions of female sexuality and emancipation.

The controversy arose because "Next to Normal" was not nominated by the jury who chose the three nominees listed above. In fact, the Pulitzer Board notes on its citation that "Next to Normal" was "moved into contention by the Board within the Drama category," and LA Times theater critic Charles McNulty, who was the chairman of the jury whose recommendations were overriden, has now written an editorial in his newspaper to express his displeasure with the Pulitzer Board for overridding its nominations and awarding the prize on "Next to Normal" instead.

McNulty is hopping mad, but New York Times theater critic Ben Brantley, who himself chaired a Pulitzer jury whose recommendations were ignored (the Pulitzer Board chose David Lindsay-Abaire's "Rabbit Hole" over Brantley's jury's less accessible nominations) is more sanguine. In his own piece about the brouhaha, Brantley notes: "Any annoyance I felt then was tempered by a weary awareness that the Pulitzers have usually gone to firmly middlebrow works, the majority of which are highly unlikely to blaze in the annals of posterity as daring innovators. They can be read as an index of solid bourgeois tastes over the years but not much more."

"Next to Normal" becomes only the eighth musical to win the Pulitzer Prize for Drama, after: