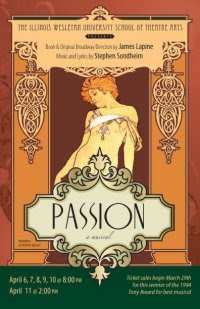 "Passion" is a bit of a weird duck. Stephen Sondheim's music is gorgeous, no question. But James Lapine's book... And the whole premise of the show...

This "Passion" is based on the film Passione d'Amore , directed by Ettore Scola, which was itself based on a novel called Fosca by Iginio Ugo Tarchetti. This means we can blame neither Sondheim nor Lapine for the plot, but we can blame Sondheim for picking up on it and wanting to write a musical about it.

"Passion" begins when a handsome army officer named Giorgio Bachetti is sent from Milan and the loving arms of his beautiful mistress, Clara, to a remote military outpost in the mountains. Giorgio doesn't feel he fits in with the other soldiers, who talk of nothing but women and horses, and he doesn't know what to make of strange screams coming from upstairs, above the dining room where everyone collects to eat together. Dr. Tambourri, the post's medical officer, explains that the screams are coming from Fosca, the cousin of their commanding officer, Colonel Ricci. Dr. Tambourri says that Fosca, a wretched and ugly woman, has been very ill for a long time, that she feels everything more strongly than normal people, as if her nerves are too close to the surface.

And this is where Giorgio's life begins to unravel. Because he misses his lovely mistress and is unhappy in general, he paces outside on the grounds, and upstairs, Fosca sees him and develops a mad passion for him. Mad being the operative word. Even though he makes it clear his heart is not free, Fosca begins coming down to dinner, sitting close to him, trying to engage him in conversation, and pushing herself at him in every way possible.

Giorgio tries to be kind, and then pushes her away as best he can, relenting only after the doctor argues that she is ill and will surely die unless Giorgio goes to her. With him at her bedside, Fosca survives. She now contends that she loves him completely, that no one will ever love him as deeply as she does, and at some level, at some point, Giorgio agrees that her love is so consuming and overwhelming he has no choice but to love her back.

And there's the rub. Do we really need a lush, darkly romantic musical about a man who succumbs to his stalker? Sondheim wrote that from a different angle in "Assassins," where John Hinkley sings about feeling fire, drinking poison, tearing his heart in two, if that’s what it takes to earn the love of Jodi Foster, the object of his obsession.

But Sondheim says that’s not what “Passion” means, that this is not a happily-ever-after for either the stalker or the stalkee. Instead, he’s said in interviews that it’s about how destructive love can be, and indeed, Giorgio does end up ruined, wrecked, alone.

I don’t have any answers for those who question the plot, and honestly, every time I’ve seen this show, the audience has laughed at Fosca and her smothering, ridiculous idea of love. It’s clearly a tough one to pull off, and kudos to Illinois Wesleyan and director Scott Susong for doing as well as they do.

Somebody decided that the production needed an Art Nouveau look, and it’s especially notable in Bridget Gavlin’s lovely costumes for Clara.

Kelly Rice’s set design, with a gallery used for multiple purposes and tables and beds that roll on and off at the speed of light, also works well, except for a silly little disc dropped behind Clara when she’s supposed to be in her boudoir. There’s no need for it, and the way it pops on and off is distracting.

Gary Echelmeyer’s lighting design plays a huge role, creating mood and storms as backdrops. The only weakness on the production side is the sound – there were microphone and volume issues throughout the show on opening night, and that was a shame. I’m not sure why there was a need for microphones in an intimate setting like IWU’s McPherson Theatre, especially since all of the voices were so good.

Maia Diaz sounds and looks beautiful as Clara, and Alex Pagels is sympathetic and strong as Giorgio. The chorus of soldiers is good, as well, with Michael Hansen’s Lieutenant Torasso a standout.

As Fosca, Sarah Bockel sings well, but it’s her acting that has to carry the burden of the show. Fosca is a pretty impossible character, this maddening woman who is physically repulsive, selfish and histrionic, and yet somehow loveable to Giorgio. Bockel is probably too pretty for the role, but she fully commits to the physical and emotional wretchedness, and she is every bit as intense as I remember Donna Murphy, who won a Tony for the original “Passion” on Broadway.

I’m not sure I’m ever going to be a fan of “Passion” – I feel too strongly about the distasteful nature of the premise – but IWU’s production certainly brought home the fact that the music is amazing and needs to be heard.

Performances continue until April 11th. For more information or to reserve tickets, click on the link at left.
Posted by JulieK at 8:30 PM