Is There a Writers' Workshop Out There for You? 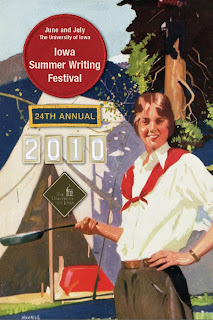 There are dandy opportunities out there for writers every summer, some with scholarships or fellowships or other ways to get there on the cheap.

The most well-known is probably the Iowa Summer Writing Festival, associated with the University of Iowa and held on their campus in Iowa City. They offer workshops on topics all over the map -- creativity, humor, character, imagery, etc. in areas like fiction, non-fiction, poetry, playwriting and children's books -- ranging in price from $280 to $560, depending on the whether you choose a weekend or a whole week. If you register early enough, you can get a room at the Iowa House, the hotel inside the Iowa Memorial Union on campus, or the Sheraton in downtown Iowa City. Otherwise, you may find yourself staying a bit further afield and driving in for your sessions.

The Iowa Summer Writing Festival is open to anybody over 21, and you can register at the link above. The first workshops begin June 13 and the last ones end July 30.

If you prefer to head east instead of west, you might want to try the Midwest Writers Workshop in Muncie, Indiana. (Any "Hudsucker Proxy" fans out there who want to visit Muncie? Fight on, fight on, dear old Muncie!) MWW is a two-day affair, with a one-day intensive session with workshops that seem to be devoted more to craft scheduled for July 29, or extra days that include more selling and marketing information on the 30th and 31st. Full workshop information is available here. Part I only is $115, Part II only is $240, and the package that includes Parts I and II is $325.

There are also conferences and classes out there if you prefer something in a specific genre.

Romance Writers of America's national conference, which attracts about two thousand published and unpublished writers as well as related professionals like agents and editors every summer, will be in Nashville this year, from July 28 to 31. The RWA conference features lots of individual workshops plus a huge autographing party that benefits literacy and the industry's marquee events, the Rita Awards Ceremony. FMI, visit the RWA website.

Mystery writers will be heading to the Edgar Symposium in New York City this weekend (April 28-29), and perhaps scooting right down to Arlington, Virginia, for Malice Domestic immediately afterwards. Malice Domestic, featuring Guest of Honor Parnell Hall, Toastmaster Rhys Bowen and Lifetime Achievement Award winner Mary Higgins Clark this year, takes place April 30th to May 2nd at the Crystal Gateway Marriott Hotel, Arlington, Virginia. You'll find out who won the Edgars and the Agathas after these events.

If you'd like a more fan-oriented mystery conference, Bouchercon is the biggie. It will be held October 14-17 in San Franciso. Closer to home, Bouchercon 2011 is scheduled for St. Louis, with Chicago's Sara Paretsky receiving the Lifetime Achievement Award.

The Science Fiction and Fantasy Writers of America (commonly known as SFWA, pronounced sif-wah) host the Nebula Awards Weekend in Cocoa Beach, Florida, May 14-16. That ties in with the launch of the space shuttle scheduled for the 14th and a simulcast of the Nebula Awards ceremony to a screen in New York City.

Lynn Frewelling, author of "The White Road," is inviting SFF writers to a cruising conference called Writing on the Waves Workshop Cruise May 23-30 if you'd like to get some work done on the high seas. If the Caribbean counts as "the high seas." I really have no idea!

There's also Hypericon in Nashville June 4-6, and Wyrdcon in California June 11-13 for those who like to dress up and role play with their science fiction and fantasy.

The Clarion Writers' Workshop, an intensive six-week program at UC San Diego for those who want to write short science fiction, fantasy or horror, is tough to get into and very prestigious if you do. You needed to apply by March 1 for this year's workshop (June 27 to August 7) but you can plan ahead and polish your submission for next year now.

And way out there, the 68th World Science Fiction Convention (Worldcon), called Aussiecon Four this year, will be held September 2-6 in the Melbourne Convention and Exhibition Centre in Melbourne, Victoria, Australia. That's where the Hugo Awards will be handed out.

If you know of any other writers' conferences or workshops coming up, be sure to let me know and I will add them to the list. No matter who you are, it doesn't hurt to polish up your skills or commune with other writers to get the wheels turning...

Addendum: My friend John Chu, who is attending Clarion in San Diego this year, notes that Viable Paradise, the annual science fiction writing workshop held on Martha’s Vineyard, is a terrific one-week option with good information on writing and selling commercial science fiction and fantasy. Viable Paradise is scheduled for October 3rd-8th, 2010. You must apply to attend; the submission period closes June 30th.
Posted by JulieK at 10:48 AM