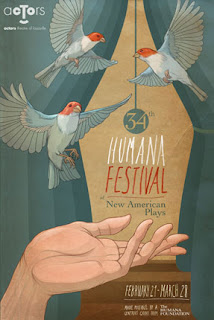 The Humana Festival at the Actors Theatre of Louisville has been a champion of the ten-minute play format, presenting some of the best examples of ten-minute plays ever as part of their annual festival, and also handing some lucky playwright a thousand dollars and the Heideman Award every year.

Most times, when attending the Humana Festival, I've found that the choices sort of cover the waterfront. That was absolutely true this year, with four short plays on stage in ATL's Pamela Brown Auditorium that ranged from banal to brilliant, with a little bit of baffling (in the sense of "Why the heck did they choose this play?") thrown in for good measure.

I liked but didn't love Gamel Abdel Chasten's "Let Bygones Be," directed by KJ Sanchez, a musing on American life as seen through individual relationships to transportation.

Weaknesses: It seemed to still be in the development stage and a lot longer than ten minutes. Plus the section on people whose jobs (auto worker, Pullman porter) have been phased out as we move into the 21st century didn't work for me, considering it hasn't been that long since I rode a train and saw a conductor/porter with my own eyes. Job that doesn't exist anymore? Really?

The other problem was that it sort of limped to a conclusion and the audience wasn't exactly sure it was over, which is never a good sign.

Still, David Darrow did an excellent job as a singing cowboy, and the songs themselves were intriguing. Actually, the whole premise was intriguing, and I liked the clearly-added-at-the-last-minute WalMart worker (Natalie Allen) who was fired and ended up sleeping in her car, bringing the transportation theme full circle.

Next up was "Post Wave Spectacular," by Diana Grisanti, directed by Amy Attaway, the weakest play, the one that raises the "Why, Literary Manager, why?" question. It involved three women, all involved at some time in the past with an unnamed casanova who'd treated them poorly, who lure a fourth woman into their parlor to...

Okay, here's where it gets silly. They lure her there to trap her and keep her away from Casanova. And this all has to do with tea -- they serve tea and have a huge cabinet full of more tea -- and female empowerment and imprisoning this poor fourth woman for her own good. I'm quite supportive of female empowerment myself, but what part does tea play in this? Why are they all stuck there for a year? Don’t they have families? Is staying away from one bad boy so important that they’ve structured this elaborate ruse and trap around him?

But my questions make it sound like the play was a lot more provocative than it actually was. The words "pointless" and "annoying" come to mind as well my original "baffling."

“Lobster Boy,” written by Dan Dietz and directed by KJ Sanchez, is a one-actor play, as a young man, here winningly portrayed by Trey Lyford, gives a lecture on lobsters, the ability to feel pain, psychology and brotherly love. I’m not going to say too much about the plot, as it has its surprises, but I found it both funny and moving, and maybe even a little creepy. It’s a worthy winner of this year’s Heideman Award.

But it was the last play that made the whole evening worthwhile. I’ll say it right now – Greg Kotis is freaking brilliant. Kotis, probably best known for “Urinetown,” which I also think is brill, wrote “An Examination of the Whole Playwright/Actor Relationship Presented as Some Kind of Cop Show Parody.” The title says it all, really, but doesn’t convey how hilarious or clever this play comes off in performance, or how much it has to say about the current state of affairs for playwrights. There’s even an unspoken jab built in, since so many playwrights seem to be turning to the “Law & Orders” of the world to make a living they can’t in the legitimate theater.

Sean Daniels’ direction was spot-on, and actors Kotis, Gamal Abdel Chasten and Gregory Maupin made the most of their ten minutes, with Kotis playing himself, the playwright who gets knocked around and given the third degree for the shortcomings in his script. That adds a whole other level to the metahumor.

I’d love to see this “Examination” presented in ten-minute play festivals everywhere, although I fear it will never be as good without the actual playwright as an actor.

Here is info on the Heideman Award in case you have a ten-minute play you'd like to submit.

Don’t forget that our very own Heartland Theatre also has a ten-minute play contest every year. For 2011, the theme will be BACK TO THE PORCH, with all plays required to be set on a back porch. That theme was chosen to honor the tenth anniversary of the first-ever ten-minute play festival at Heartland in 2001. Because there is a huge lag time between when you enter the Heideman and when you find out (a year and a half?) feel free to write a porch play and send it to both contests.

When it comes to my own writing, I know I will never write a ten-minute play as well as Greg Kotis does. But I intend to keep trying. Maybe I will even send off an entry to the Heideman Award contest. Can’t win if you don’t enter! And then other critics can feel free to call me banal or baffling. Brilliant is okay, too.
Posted by JulieK at 11:59 AM