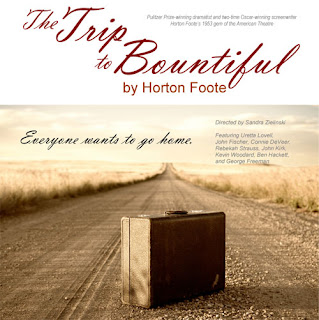 How much have things changed since 1953? A lot in some ways. Not so much in others.

Horton Foote’s “The Trip to Bountiful” is about a senior citizen named Carrie Watts. Carrie is trapped in a small Houston apartment with her son and odious daughter-in-law, but she longs for the days when she could touch the earth and feel a sea breeze on her face. Carrie longs to go home to a small town called Bountiful, where she had a house and trees and a whole, big, bountiful life to call her own.

Carrie’s son, Ludie, is afraid that his mother is too frail to travel, and the odious daughter-in-law, a piece of work named Jessie Mae, isn’t going to let Carrie’s pension check get out from under her control. With them watching her every move, Carrie has no chance of taking her trip to Bountiful.”

Foote wrote “Bountiful” as a teleplay in 1953, and it hit Broadway (with beautiful, fragile silent film star Lillian Gish as Carrie) later that same year. But “Bountiful” survived and seemed fresh in 1985, when Geraldine Page played Carrie – and won the Best Actress Oscar – in the film version of the play.

Here we are, 25 years later, and we still see generations in conflict when they have to share the same space, painful decisions being made about elder care, and too many people dying a little inside for every precious day wasted in a place they hate.

Sandra Zielinski directs the stage version of “Bountiful” for Heartland Theatre with a slightly different focus than the film. Her Carrie, played with charm and spirit by Uretta R. Lovell, matriarch of the local Lovell acting dynasty, seems less soft, less flighty than Page, with a flinty core that makes it easy to see her digging in the dirt and raising her son by hook or by crook in her younger years. That gives Carrie a more real, less romanticized feel, opening up the script to a few more comic moments as well as some real heart.

John Fischer looks and acts just right for worrier Ludie, the son unwilling to buck his controlling wife, lending sympathy to a fairly unsympathetic character, while Connie de Veer keeps Jessie Mae just as annoying and self-indulgent as Foote wrote her. I wish Jessie Mae were a caricature, but I think we’ve all met a few too many Jessie Maes in our lives to think so. My only quibble is that deVeer’s hair is too pretty and natural for a 1940s beauty parlor addict. More Aqua Net, please!

I also liked Rebekah Strauss, George Freeman and John Kirk as kind-hearted strangers Carrie comes across, and Kate McDermott’s work as a dialect coach to get just the right Texas sound was a welcome contribution.

Steven House’s spare scenic design, with wood frames that can look like the bars of a jail cell or the bones of a house, and Jesse Folks’ usual stellar lighting design create simple, effective stage pictures, set the right mood, and move us from one location to the next with ease.

Heartland’s “Trip to Bountiful” is low-key, sweet, heartfelt and heartwarming. It’s exactly the kind of show Heartland does well, and a fine revival of a classic piece of Americana.


FYI:
“The Trip to Bountiful,” by Horton Foote