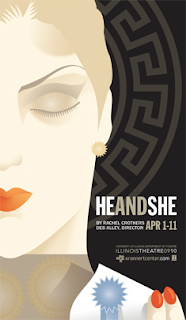 Note: This review ran in the Champaign News-Gazette on Sunday, April 4, 2010.

For "He and She," the U of I Department of Theatre reaches out to Bloomington, its neighbor to the northwest. Not only was the play written by Bloomington native Rachel Crothers, but guest director Deb Alley is Associate Professor of Theatre at Illinois State University and Artistic Director of the Illinois Shakespeare Festival in Bloomington.

It's curious in some ways that Crothers was born and bred in Bloomington-Normal. We don't necessarily think of sophisticated, early 20th century Broadway playwrights springing from the Heartland. But Crothers went in for the kind of upper class relationship play you might expect from Philip Barry or even Noel Coward. Like Barry, she wanted to examine the role of gender in American society, and what exactly it meant to be a woman or a man within the confines of marriage.

If that sounds dire or dreary, "He and She" definitely isn't. It has some heavy issues and some speechifying on whether woman should put family over career or artistry, whether men should make families with women who seek fulfillment in jobs outside the home or only accept happy homemakers, but it's also got some amusing, lighter moments.

The amazing thing is that Crothers wrote the play in 1911. We have a tendency to think that working women popped up in the 40s when America went to war, and then got shoved back into the kitchen in the 50s. "He and She" is a valuable lesson that women who yearn for careers and face conflict because of it is nothing new.

Deb Alley does an excellent job keeping the pace moving and creating snap and crackle between her players, and Moon Jung Kim's scenic design creates a lovely studio and even lovelier Edwardian living room inside Krannert's Studio Theatre.

It's often difficult for 21st century actors to acquire the right posture and attitude to properly play these kinds of soignée, society folks from a lost time. Alley's cast does just fine, adding just a tiny bit of today's spirit to yesterday's characters.

As Ann Herford, the sculptress who aspires to the same artistic heights as her husband, Carley Cornelius looks and acts a bit like screen star Norma Shearer, who was exactly the kind of actress who would've taken on a role like that. She has enough fire and intelligence to make Ann seem believable, and she has good chemistry with both Jess Prichard, handsome and properly aristocratic as husband Tom Herford, and Jaclyn Holtzman, who is giddy and charming as their teenage daughter.

Bri Sudia gets some of the best scenes and creates excellent tension as Daisy, Mr. Herford's sister, who can't admit she'd love to fall in love, and she plays well off Tyrone Phillips' clueless Keith McKenzie, who is engaged to the wrong sort of woman for him. Jenny Nelson plays that woman, an ambitious magazine editor named Ruth, and she, too, has good energy and strength.

Doug West rounds out the cast as Ann's father, and although he's clearly too young to take on this Charles-Coburn-meets-Lewis-Stone father figure, he has the right hair and humor to make it work.

By the end, "He and She" is entertaining and intriguing, offering a window into the world of women in 1911. It's a bit depressing, as well, as we look back and realize a women of 2011 might face exactly the same problems. Can my marriage last if I'm better than my husband at our shared occupation? Can I follow my artistic vision if it means splitting my attention between my art and my child? Rachel Crothers provides one answer for one woman. Let's hope today's women can find more of a variety of answers.
Posted by JulieK at 2:54 PM