"As You Like It" for the Younger Set at ISF 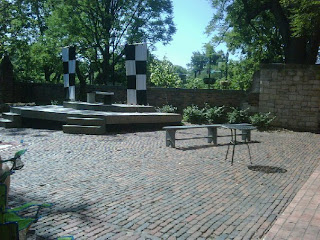 As a rule, I don't review children's theater. Yes, I'm a bit of curmudgeon, but it also doesn't really work to critique young casts (you can't really hold children to the same standards as adults) or to try to figure out what works for an audience under 10 when you are not among them. But I was intrigued by the idea of the Illinois Shakespeare Festival's initiative to bring brief, breezy versions of Shakespeare plays to kids for free. This means that the ISF's usual terrific actors are offering their talents FOR FREE to anyone who wants to make a reservation and toddle on over to the courtyard at Ewing Manor (seen in the picture posted here, which I snapped on my Blackberry before the show began) at 10 am on Wednesdays and Saturdays.

So last Saturday, I ventured over to Ewing Manor to see the children's version of "As You Like It," where I saw a pretty good show, with an audience comprising lots of young ones, from a few months to maybe 11 or 12, the adults who accompanied them, a few umbrellas for shade, and a strange assortment of lawn chairs and blankets to throw down on the hard stones.

The cast, led by Megan Storti as Rosalind, my favorite Shakespearean heroine; Drew Vidal as Orlando, the lovestruck hero; and Rhys Lovell as both evil Duke Frederick and his older brother, Duke Senior, is top-notch and committed to presenting the material, even in less-than-ideal circumstances. And by that, I mean an outdoor courtyard in bright sun, with most of them in layers of costumes, and an audience full of children who aren't really old enough to understand what's being said to them. The show was an hour long, which might be okay in cooler conditions, but seemed to be pushing the envelope at almost 90 degrees. In fact, a lot of the kids skipped out and went to play on the grass or hide out in the shade in one of the tunnels, although they all came back for the closing moments, when bubbles were released. Yes, the bubbles pulled all the children back to the stage, a stronger lure than any songs or hijinks the actors got up to.

In general, I would say this shortened, spritely version of "As You Like It" was a success for the parents in the crowd, and maybe for the older children. I doubt the really young ones got much out of it. Except the bubbles.

But kudos to the cast for trying their hardest and giving it their all. And kudos to the ISF for offering this kind of programming. If it reaches one child among the many, it's probably worth it to keep audiences growing and sow some seeds for future actors and directors. Who knows? Maybe somebody chasing bubbles today will be auditioning to be a fairy in "A Midsummer Night's Dream" tomorrow.
Posted by JulieK at 1:15 PM