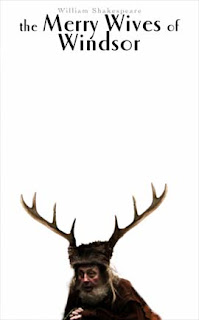 The one thing that “The Merry Wives of Windsor” needs to be is merry. If the tricks two suburban housewives play on the story’s drunken buffoon (who fancies himself a lothario) don’t bring down the house, there’s just no point in putting on the show.

Director Catherine Weidner has chosen to set her “Merry Wives” in the 1920s, in a town something like Windsor, Illinois, if such a thing existed. The real Windsor is a suburb of London, and it was a prosperous village with lots of hotels and inns and a few religious relics that were attractive to pilgrims in Shakespeare’s day.

“Merry Wives” is set in and around the Garter Inn, where Falstaff, the larger-than-life clown mentioned above, is hiding out after piling up debts he can’t pay. To get his hands on some cash, Falstaff decides to romance both housewives, Mistresses Ford and Page. Master Ford is irrationally jealous, while Master Page is irrationally not jealous. But their wives are cheery, mischievous types, and they concoct a scheme of their own to make Falstaff look even more of a fool.

And then there’s the subplot about lovely Anne Page, the daughter of Master and Mistress Page, who has three suitors, including a silly French doctor her mother likes, a doofus with good connections her father likes, and the more normal boy she herself likes. Mistress Quickly, who works for the doctor, gets involved in all the plots and counterplots, delivering notes and messages hither and yon.

Weidner’s cast looks good and keeps the mood frisky in their pretty 20s attire, including the ladies in summer frocks and hats, Slender, the doofus, in a straw boater and high-water pants, and Master Ford, who affects a Charlie Chaplin bowler hat and thick mustache when he pretends to be someone else.

Fred M. Duer’s set is painted in the same creams, beiges and pinks as the costumes, offering slightly tilted small-town storefronts that fold and unfold to show the inn, the doctor’s office and the Ford household and setting the right light and comical mood.

Among the cast, George Judy stands out as Falstaff, the much put-upon old goat who drives the plot, with a voice and persona as rich and robust as Falstaff himself.

He has good chemistry with Magdalyn Donnelly’s delicious Mistress Quickly as well as Demetria Thomas and Kathy Logelin, plenty cheeky and spirited as Mistresses Ford and Page.

Probably the funniest character is Gerson Dacanay’s bizarre little Dr. Caius, a popinjay and martinet who brings to mind Hercule Poirot if he were blended together with Mickey Rooney. He’s hilarious and over the top in all the right ways.

Drew Vidal as hopeless suitor Slender, Kevin Rich as the proprietor of the Garter Inn, and Max Ganet as a very dim servant named Simple also make a good impression.

This “Merry Wives” is just for fun, but it’s still Shakespeare, which means it’s not appropriate for youngsters. Besides, it's full of sexual references and language jokes that are way over their heads. They'll be bored silly and they'll take it out on everyone within ten rows of you. In other words – if you have children, leave them at home, please. It’s unfortunate when crying babies or fussy toddlers ruin everybody’s evening, especially when the actors and designers are working so hard to bring us all a good show.

Your kids and your fellow theater-goers will appreciate it if, instead of creating a black hole of discord in the audience at a full-length Shakespeare play, you take the younger crowd to Community Players’ “Fantastic Mr. Fox” or the children’s version of “As You Like It” currently playing on Saturdays and Wednesday mornings in the Ewing Manor courtyard. The latter is free and it’s meant for kids.

“The Merry Wives of Windsor”? Is not.

“The Merry Wives of Windsor,” by William Shakespeare
Performed in repertory by the Illinois Shakespeare Festival through August 7