Cary Grant Will Steal Your Heart in "To Catch a Thief" 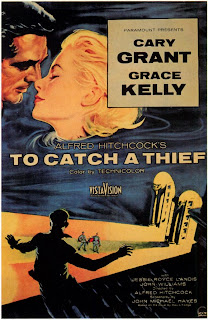 I’m not sure if all this Cary Grant action is in honor of “Mad Men” and its 4th season premiere on Sunday, but I wouldn’t be surprised. Don Draper, the mysterious ad man in “Mad Men,” is the heir apparent to Cary Grant’s John Robie, international jewel thief and romantic icon. The movie came out in 1955, so the milieu is a little too early for “Mad Men,” which is up to 1964 this year, but the elegant, dangerous, dishy feel is definitely there.

The movie itself, with its bad boy hero and criminal hijinks, spawned some of my favorite TV shows of days past, like “It Takes a Thief” and “Remington Steele.”

Here’s what you need to know about the first ten minutes of “To Catch a Thief”:

John Robie (played by Cary Grant at his most delicious) was a hero in the French Resistance and then a famous jewel thief called The Cat. (Cat = cat burglar, you see?) He’s supposedly retired, but there have been a rash of new burglaries on the Riviera with his name all over them. The French police try to bring him in, but he stages a ruse and escapes. During the escape, much fabulous scenery is displayed, and director Alfred Hitchcock pops up as a passenger on the bus next to the beautiful Monsieur Robie.

Et voila! After that exposition, we’re off and running. Robie gets ten days from the local constabulary to find the real culprit(s) or go straight to jail, he finds his old criminal associates to see if one of them is back in business using his signature moves, and he forges an alliance with a friendly insurance man who can furnish a list of potential victims, including a wealthy widow (the wonderful Jessie Royce Landis) and her dewy daughter (an unbelievably lovely Grace Kelly). The person who has taken his place as The Cat isn’t too pleased he’s hanging around mucking things up, either.

As Robie sums it up, “The police want me in jail, my old friends want me dead, and The Cat wants me out of town.”

“To Catch a Thief” depends almost entirely upon style, seduction and the joy of watching two impossibly beautiful people play cat-and-mouse with each other. I must admit I am not the world’s biggest Grace Kelly fan, and the first time I saw “To Catch a Thief” when I was young, I found her vapid and uninteresting, as well as not nearly good enough for Cary Grant.

Upon rewatching, I like her a lot better than I did then. It’s not just her beauty, but the mischievous humor she projects. She and Mr. Grant are a good match, even if he is clearly too old for her. (He was often too old for his leading ladies, and it doesn’t seem to matter a bit.)