Though This Be MAD MEN, Yet There Is Method In't. 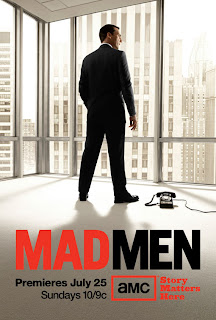 Last night, "Mad Men" launched its fourth season on AMC, and I was waiting with bated breath. I’m not sure if it’s because I lived through the 60s (I think I’m the same age as Bobby Draper, who is currently about 8 on the show) so the furnishings and clothes flip my nostalgia switches, because I love New York City and would love to step onto Madison Avenue, circa 1964, or because the advertising milieu is so interesting. (I did once work in advertising, although only in a managerial capacity. But I was good at copywriting, if I do say so myself.)

Honestly, I don’t think the appeal of “Mad Men” comes from any one of those things. Not even the beauty of Jon Hamm, the actor who plays protagonist Don Draper, could do it by itself. No. I think this is a case of creator Matthew Weiner knowing exactly what to do in terms of keeping the writing at the highest level, and creating characters and situations that are sometimes dire, sometimes funny, sometimes poignant, but always quite human. I want to know what happens to them next. Okay, not Betty so much. I have found the character and the actress (January Jones) quite limited from the beginning, and that hasn’t changed as we head into Season 4.

So what’s changed since now that we’ve vaulted to Thanksgiving, 1964? On the home front, Don and Betty’s marriage is totally and completely kaput. Thank goodness. The kids are growing up, with Sally (Kiernan Shipka) more rebellious and Bobby less of a nonentity. Betty is even chillier and less motherly than before, and her new marriage with Henry Francis is even more annoying than her old affair with him. Betty also has a new mother-in-law to contend with, and we saw that Mrs. Francis the Elder does not like Betty one bit. Good for her.

At the office, Sterling Cooper has gotten leaner and meaner as it’s morphed into Sterling Cooper Draper Pryce, with a hot little SCDP on the lighter, brighter walls. The team that broke away from Sterling Cooper – like Peggy, Pete, Harry and Joan – is still there, although they’ve all already moved forward, taking on more responsibility and more confidence in their new roles at SCDP. Joan (Christina Hendricks) and Peggy (Elizabeth Moss) are also sporting nifty new hairdos, which doesn’t hurt.

Roger Sterling, my favorite reprobate who always gets the best lines, is in fine form, even if he doesn’t seem to have changed a bit. John Slattery is so good at playing Roger that I’m not sure the general audience realizes he’s acting. He makes it look effortless and he deserves every award there is out there for making a very unattractive character so engaging.

And then there’s Don... As the episode opens, Don has an interview with Advertising Age, but he doesn’t want to answer questions about himself. How can the quintessential Ad Man not want to advertise himself? The enigma that is Don doesn’t want to share any information whatsoever.

Still, I get the feeling that the question “Who is Don Draper?” – the first words of the new season – will continue to recur as we move on into 1965. I’m not sure Don Draper knows who he is, either. Except one majorly screwed up guy.

With no family and no home in the suburbs, Don has a nice, if tiny, apartment in . He’s not really dating anyone, although he does have an awkward first date with an actress who lives at the Barbizon (famous for onetime resident Grace Kelly, who was apparently the wildest child ever to live there) and a hookup with a hooker, where Don seems to be looking for degradation as much as pleasure.

But even so... There’s a definite feeling of moving forward, finding self-knowledge, even if only a little, in this episode, whose title, by the way, is “Public Relations.” Peggy and Pete pull a PR stunt involving a fight over ham, but it’s a step into the future of advertising, where PR is part of the landscape. Don tells Betty that she and her husband need to move out of his house, and he also tells a potential client that SCDP isn’t interested in their traditional, moldy, prudish account. Onward and upward! And by the end of this episode, he’s giving a much franker, more exciting interview, telling the truth about the coup that formed SCDP and revealing more about himself.

I’m hoping that Don’s realization that it’s important to market himself and to take credit for his successes and his showdown with Betty and Henry over the house mean he has acquired enough forward momentum to clean up his life a bit, too. I hope, at least, he’s moved past chilly blondes (including the Barbizon girl, played as a snippy little twit by Anna Camp, who seems to specialize in characters like that) and hookers with slapping skills (although she was still more appealing than either Betty or Miss Barbizon).

As usual with “Mad Men,” I can’t wait to see what happens next. Will Peggy start a flirtation with her cute new office-mate? Will Pete’s wife, Trudy, show up, now that the actress who plays her (Alison Brie) is on another show? Will Roger stick with his too-young wife? Will Betty get the hell out of Don’s house and take her insufferable husband with her? Will Sally and Bobby come live with Don, and bring their former housekeeper, Carla, with them, since she was pretty much the only mother they ever knew?

More importantly, will Sterling Cooper Draper Pryce get any new accounts so Lucky Strike won’t continue to comprise 71% of their client pool?

How long till next Sunday?