"Little Dog" Gets His Day at Urbana's Station Theatre 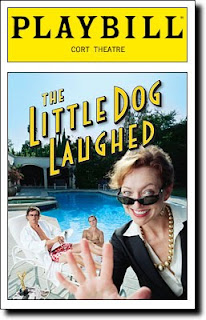 Douglas Carter Beane's "The Little Dog Laughed," a scathing satire of Hollywood and its lack of morals, (What? Hollywood has no morals? It's shocking!) is playing at Urbana's Station Theatre for one more week.

Caveat: I caught half of the show last week. I wasn't feeling well – nothing to do with the show – and left at intermission, so I can only tell you about the first half of the Station's production, although I can discuss the play as a whole, since I've read it, and I've now seen how the first half plays, anyway.

On paper and in performance, it's a funny play, with issues that are as in style today as they were fifty years ago, about a voraciously ambitious agent, her client, an up-and-coming star who "suffers from a slight recurring case of homosexuality," the rent boy he falls in love with, and the rent boy's sort-of-girlfriend, who doesn't seem to mind that the guy she wants makes his living sleeping with men for money, but does mind if he's in love with one of his tricks.

Complicated, yes. Stylish and funny, yes. Sad, yes. All of that. The script is very clever and well-constructed, and it offers an amazing showcase to the actress who plays the agent. Julie White won a Tony for it. Everybody else who's done well with it has also made a huge impression. It's not that the role is anything we haven't seen before ("Entourage," "Laura," even "Ruthless") but that she's talking directly to us a lot of the time and she's so cheerfully evil and manipulative, so convoluted and yet so direct as she goes about achieving her schemes and her desire for her version of a fairytale happy ending. It's just that her fairytales are more warped than other people's.

So when Diane, the agent, says she wants a happy ending, she tells us she means a real "Hey Diddle Diddle" kind of thing, where the little dog laughs and the dish runs away with the spoon. Or, in her mind, where she can keep her client looking heterosexual in public, acquire a smash play for him to star in, maneuver the playwright into butching up his characters for a film version, and sweep the love interest and his girlfriend up in a neat bundle of dishes and spoons.

Don't worry. It doesn't have to make sense. It's just supposed to be ironic and cynical and wickedly funny.

Although Chris Taber chews up and spits out Diane nicely, and Katie Baldwin is terrific as Ellen, the maybe-maybe-not girlfriend, the "Little Dog" directed by Mathew Green for the Station comes off more amusing than hilarious. That may be the crowd (we're not coastal) or the setting (the Station is quite small and intimate, and the unpleasantness of all of the characters, as well as the nudity, is very in-your-face) or just that it's hard to pull off without a proscenium stage and all the bells and whistles of stage magic that a Broadway theater can offer.

Or maybe it's just me, and I find the idea of people who can't be who they really are, who are willing to give up who they really love, just to achieve stardom in a place as silly as Hollywood, too tragic to make me really howl with laughter.

“The Little Dog Laughed” continues at the Station Theatre in Urbana through next Saturday, with all performances at 8 pm. For more information or to reserve tickets, see the Station's website at left.
Posted by JulieK at 3:35 PM