I still don't believe it's really September already. ("Mad Men" halfway done? Summer breathing its last? The fall season in TV and theater almost upon us? What?!) But my calendar and Green Day are telling me to wake up and smell the ragweed, so here we go. If it has to be September, we might we well enjoy ourselves. 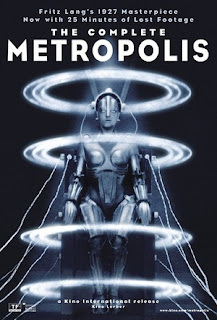 First up on your September viewing calendar should be Fritz Lang's 1927 silent film masterpiece "Metropolis," showing September 2-5 at the Normal Theater. Lang originally created his futuristic, dystopic man-versus-machine (or woman-becoming-machine) opus at about 153 minutes, but it was cut substantially before it hit the US. Different versions of different lengths have been floating around ever since, some with musical scores attached, although none were as long as the first one shown in Berlin. Film scholars had pretty much decided that the original was lost forever, until 2008, when a print showed up in a Buenos Aires museum. A complete print. All 153 minutes. And that is the complete "Metropolis" the Normal Theater will be showing. If you are a student of film, you'll want to see this. Some of Lang's images are incredible, and they promise to be even more incredible in this restored version of the complete film.

On September 9th, Community Players opens "Smokey Joe’s Café," which runs through the 26th. This is a "jukebox" show, featuring the songbook of Jerry Leiber and Mike Stoller, one of the most popular songwriting duos of the 1950s and 60s, with songs like "Hound Dog," "Yakety Yak," "Love Potion #9" and "Jailhouse Rock" to their credit. You can buy tickets online at the link provided or call the box office at 309-663-2121.

Second City's touring company comes back to town on the 11th with its "Fair & Unbalanced" comedy show, one night only at the Bloomington Center for the Performing Arts.

And then you can catch (or participate in) "Re:Verse," an open mic night for poetry with special guest Bill Morgan at Theatre'sCool on September 14th.

My own favorite September option is Alan Ayckbourn's funny and scary play, "Woman in Mind" at Heartland Theatre, opening on the 16th and closing on October 3rd. "Woman in Mind" deals with a woman named Susan who imagines a much nicer (and more upscale) family for herself than the one she really has. Everything we see on stage is from Susan's point of view, as her fantasy world and real life start to overlap with strange and wonderful consequences. ISU professor Don LaCasse, co-founder of the Illinois Shakespeare Festival and former Director of the School of Theatre at ISU, directs "Woman in Mind" for Heartland, with Lori Adams, ISU's Head of Undergraduate Acting, as Susan. To read more about the play, I highly recommend Alan Ayckbourn's website, which has a wealth of information about "Woman in Mind" as well as his other 70+ plays.

If you're looking for music, you might try the Fabulous Thunderbirds with special guests Hip Pocket at the BCPA or Dee Dee Bridgewater and her show called "To Billie with Love, a Celebration of Lady Day" at the Tryon Festival Theatre in U of I's Krannert Center, both on September 18.

Back-to-back-to-back: IWU's fall season gets started Sept 21st with "Crumble (lay me down Justin Timberlake)," a play by Sheila Callaghan, directed by Dani Snyder-Young for McPherson Theatre, while Parkland College Theater over in Champaign opens its season with "Duck Hunter Shoots Angel," by Mitch Albom, the author of "Tuesdays With Morrie," on the 22nd, and Chicago's Hubbard Street Dance Company comes to U of I's Krannert Center Tryon Festival Theatre on the 23rd.

ISU sneaks into the end of September, too, opening "Playboy of the Western World," by John Millington Synge on the 29th. "Playboy" is directed by Emily Gill for ISU's Westhoff Theatre.

And one last note... Annie Baker's "Circle Mirror Transformation," a play about an acting class in a small town in Maine, comes to Urbana's Station Theatre from September 30th to October 16th. "Circle Mirror Transformation" is the Little Play That Could, with a much-lauded Off-Broadway production followed by a successful run at Minneapolis' Guthrie Theatre. Chicago's Victory Gardens has announced it for a slot in its 2010-11 schedule, but Mikel Matthews and his Station Theatre production will beat them to the punch by about five months. The play reads beautifully, it's the kind of thing that can work very well in the intimate confines of the Station Theatre, and I have high hopes that Mikel Matthews and his actors will pull this one off.
Posted by JulieK at 10:44 AM