"As You Like It" from the Globe to the Art

The Art Theater in Champaign continues its "Shakespeare in Cinema" series (direct from the Globe!) with "As You Like It" tomorrow and Sunday at noon.

If you recall, a company called Opus Arte has been filming live performances of "the world's finest opera, ballet, theatre and music" and sending them to movie theaters all over the world. I saw a lovely "Love's Labour's Lost" at the Art Theater earlier this year, concluding that there was no real downside to seeing a filmed version of staged Shakespeare, no matter how awkward that sounds.

This "As You Like It," directed by Thea Sharrock, was very well received by critics when it played at the Globe, with the Guardian offering that "Naomi Frederick's superb Rosalind is a woman of wit and intelligence" and "[Jack] Laskey's Orlando is equally bewitched, bothered and bewildered, and the playfulness between the two is a pleasure." 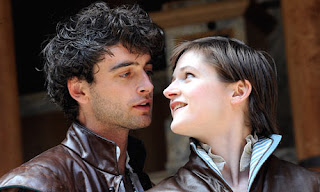 You can watch a trailer for the film here and decide for yourself whether this Rosalind and Orlando are to your liking. Or you can click here to find out more about the cast and crew.

For those of us unable to get to the Globe as a matter of course, these "Shakespeare in Cinema" screenings are a pretty sweet deal.
Posted by JulieK at 6:55 PM