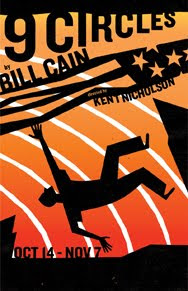 I'm quite behind on awards and nominations in the past few weeks, so I'm going to try to catch up. First up, the most tardy!

When I attended the Humana Festival of New American Plays in April, I was present for the awarding of the annual Harold and Mimi Steinberg/American Theatre Critics Association New Play Award, presented to the best new play produced outside New York City in a given year. A $25,000 prize is attached to the award, making it the largest monetary prize for playwriting.

Last year, the winner was playwright Bill Cain for his play "Equivocation," and this year, the winner was... Bill Cain! For his play "Nine Circles." He teased the play at the 2010 Humana Festival, suggesting he was not treating critics nicely in "Nine Circles." Given the description of the play (below) it does not sound like a platform for criticizing critics, so perhaps Cain thought better of that aim.

In any event, "Nine Circles" is described by the American Theatre Critics Association, the body that reads and judges the nominated plays, this way:

"Cain’s drama follows the descent into a very recognizable hell by a young American soldier accused of an atrocity in Iraq. His journey through the bureaucratic and social maze mirrors Dante’s vision of an arduous odyssey to find redemptive self-knowledge. The play premiered Oct. 14, 2010 at the Marin Theatre Company."

The poster you see above for "Nine Circles" came from that Marin Theatre Company production with illustration by Ron Chan.

The other finalists this year were Rinne Groff for “Compulsion,” Lisa D’Amour for “Detroit” and Emily Schwend for “Splinters.”

ATCA materials tell us that 27 scripts were nominated by ATCA members, with the winners chosen by a committee chaired by William F. Hirschman of the South Florida Theater Review.