U of I Summer Studio Starts June 2 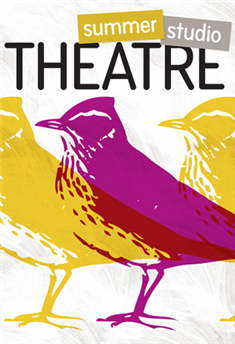 Summer Studio Theatre opens next week, with [title of show], the Hunter Bell/Jeff Bowen musical about trying to create a musical. If they can't even come up with a title to fill in the first blank on their form for the musical contest, how will Hunter and Jeff (Yes, they named the characters after themselves. But they did play the roles originally, so... There was a reason.) and their friends Susan and Heidi come up with any musical at all? [title of show] is directed by Robert G. Anderson, which is good news for [title of show] but bad news for the Illinois Shakespeare Festival over here in Bloomington, since Anderson has been very, very good playing a whole bunch of different roles the past few seasons. [title of show] plays for ten performances, closing June 26.

The second show on the Summer Studio roster is Peter Parnell's "QED," opening June 8th. Lisa Gaye Dixon directs this almost-one-man show that dances around Richard Feynman, a professor of Quantum Electrodynamics (the QED in the title) as he puts together a lecture, advises a student, reminisces about his past and deals with illness. Champaign-Urbana actor Gary Ambler will play Feynman in eight performances through June 24.

"Blithe Spirit," the third show in this summer rep, doesn't start till July 7th, with Peter Davis at the helm. This Noel Coward classic was revived on Broadway in 2009, with Angela Lansbury as Madame Arcati, the wacky medium who accidentally conjures up the ghost of newly-married Charles Condomine's first wife, the divine Elvira. I don't know which role she's playing, but I do know that Joi Hoffsommer, a terrific actress who did Coward's "Private Lives" in Krannert's Studio Theatre during a long-ago summer season, will be in there somewhere. Will she be Madame Arcati? She's a more likely Elvira, but who knows?

"Blithe Spirit" gets the Studio Theatre all to itself in July, playing from the 7th to the 23rd. That means these shows are not literally playing in repertory, but it is summer, so... I'm calling it summer rep.

For details and reservations, go here. If you click on MAKE PLANS, you'll find a handy calendar of events.
Posted by JulieK at 9:30 PM