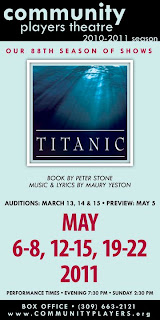 I love Maury Yeston's work. Let's just get that right out there before we go any farther.

Yeston is the composer behind the musical "Nine" and the song "Unusual Way," which I think is one of the most beautiful and captivating show tunes ever, as well as the other "Phantom," whose plot and music are much more to my liking than the more famous Andrew Lloyd Webber version. Yeston also wrote the score for "Grand Hotel," and a song cycle called "December Songs."

P.S. Classics (something else I love) put out a collection called "The Maury Yeston Songbook" in 2003, featuring songs from all of those shows, with individual songs performed by an amazing roster of Broadway stars, from Laura Benanti to Liz Callaway, Brent Barrett, Christine Ebersole, Brian d'Arcy James, Sutton Foster and Betty Buckley. If you don't own a copy of "The Maury Yeston Songbook," you need to buy one immediately. I'm not kidding.

Have you ordered one yet? I'll just wait while you do. Don't worry -- I will listen to my own copy while you're busy with that.

There is just one song from Yeston's "Titanic" included in "The Maury Yeston Songbook." It's the last cut on the cd, and it's the haunting "No Moon," sung by the lookout on the Titanic as he peers into the darkness, watching out for icebergs. Howard McGillin, who owns one of Broadway's best voices, performed the song for this "Songbook," and he's wonderful.

To my mind, Yeston's big, emotional, sweeping score is the strongest part of this "Titanic," which opened on Broadway in 1997, winning five Tony Awards, including Best Musical and Best Original Score, and running at the Lunt-Fontanne Theatre for 804 performances. On Broadway, "Titanic" was filled with stars like John Cunningham, who played the captain of the ill-fated ship, Brian d'Arcy James, beginning his Broadway career in the role of the "stoker" down in the boiler room, Victoria Clark, as gossipy social-climber Alice Beane, and Michael Cerveris, playing J. Bruce Ismay, the villain of the piece, head honcho of the White Star Line, who demands that the ship go faster, icebergs be damned.

Peter Stone's book squeezes in a lot of stories, with somewhere in the neighborhood of 70 roles played by 37 actors (if I counted correctly) in the Broadway production. That production was also famous for its complicated, hydraulic set, with three decks and the capability to lurch and tilt to indicate the ship was sinking. That's fine for Broadway (although it pales in comparison to "Spider Man" and his technological woes), but not so much for regional productions, especially in community theaters. So how in the world does a company like Community Players in Bloomington, Illinois, begin to pull off something that huge?

Director Sally Parry and Scenic Designer Bruce Parrish wisely choose to rein in the set, with a gallery at the top for the ship's bridge, two curving staircases for passengers to congregate on, a space in the center to tuck the orchestra under the gallery, and every bit of space on the apron for shifting scenes from the boiler room to the crow's nest and the radio room. There's also a scrim to project an image of the "Titanic" on at the onset. That creates some handsome stage pictures and also provides just enough playing space.

Parry and Musical Director Chad Kirvan have pulled together a really terrific cast, with lots of excellent voices to fill Yeston's score. It's an ensemble show in every sense of the word, but it's hard not to pick out favorites as we see them sing us their stories. I was especially impressed with Mark S. Robinson's take on Thomas Andrews, the ship's designer, who gives voice to the dreams of greatness and progress that went into the Titanic in both the opening and "Mr. Andrews Vision," W. John Lieder's stalwart Captain Smith; Joel Shoemaker, bringing us a sweet, honorable everyman as Barrett the stoker and sounding terrific on both "Barrett's Song" and "The Proposal," Natalie LaRocque, pretty and tuneful as the first of the Kates, Irish girls stuck in 3rd class but dreaming of what they might be in America in "Lady's Maid," and Kirvan himself, leading the band and fronting "Doing the Latest Rag."

There are only four performances left of Community Players' "Titanic," and you are well-advised to reserve tickets now. The Sunday matinee I saw was completely sold out. It also ended with a standing ovation and a lot of happy audience members.

TITANIC
Music and lyrics by Maury Yestion, and book by Peter Stone.